Power Armour to a Knife Fight

Following a disastrous campaign in the southern reaches of Novaya Sakha the Human Co-Prosperity Sphere is withdrawing from Hanhai pending reinforcements from Terra. While the Sakhan Liberation Army strikes to catch the beleaguered garrison on the move, the Mega-Corporation Heymans Yamada attempts to protect their assets in the city and evacuate some VIPs. 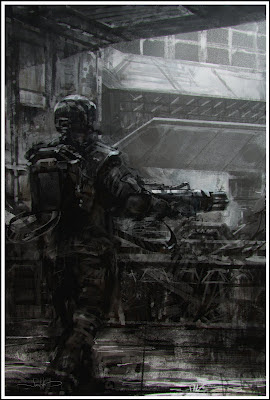 Apart from the engagement at Sagatay, Power Armour has been a trump card for the HCPS. A single-squad patrol has been clearing outlying areas of Hanhai and an ambush has been laid to take them out. This fire team is completely in the open and while it goes on overwatch to cover the second team, it takes an awful lot of fire (so much that the missile launcher can't keep up).
Just then they hear about their NCO (the seventh man who didn't go on patrol with them) being killed in an ambush and their morale takes a hit. The Senior NCO leads the second team into the grove beside a small building suppressing the rebel squad firing out - that building goes on fire and the rebels are forced to evacuate. With the first fire team going down under a vicious crossfire, some rebel squads move around the flank, trying to maintain pressure on the enemy and capture or kill the downed power armour troopers Somehow all three troopers are back on their feet (integral medical systems!) with two just lightly wounded - they wreak vengeance upon their tormenters and virtually wipe out two whole rebel squads They rush into cover on the other side of the street and pick on the rebels metres away. They're now out of line of sight of the rest of the rebel force and they feel safer (though the other fireteam is now left without any support!) That fire team decides that they're nothing for it but 'all in'. Rushing around the corner they split fire, the NCO targeting the rooftop medic across the road with his plasma cannon with surgical precision and the other two wiping out the squad at point blank range. As the rest of the rebel force cross the road to try to get to the isolated and demoralised troopers, the power armour squad continues to wreak havoc on them - first pinning them down in the shadow of the chemical plant and then raining down fire on them Despite everything the Human Co-Prosperity Sphere patrol has triumphed - outnumbered 6 to 1 and caught in the open. These power suits may be second-rate but they're still damned effective
Posted by Donogh at 21:13