Two trucks carrying important Grid equipment and other sensitive data banks are being escorted from the HCPS regional offices to the airfield for transfer to Wuwei. 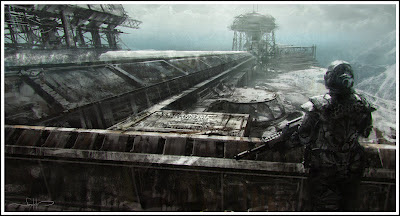 A force of SLA rebels are in a position along the convoy's likely route to interdict and capture or destroy the trucks. The HCPS escort consists of an APC (carrying a reinforced squad of 10), a light tank and both trucks have two soldiers on board - they disembark as soon as trouble looks likely Taking fire from both sides ahead the convoy slows to a crawl, putting down effective fire on a mercenary gunbot concentration to their right The Human Co-Prosperity Sphere unit has hunkered down and pays the price as it continues to take casualties, including the light tank as it explodes spectacularly. The escort did exact a price out of the ambush rebels but not nearly enough.
With nothing left to lose, the trucks take a detour off the main road. Zipping past the torrent of fire, somehow they survive [three hits from small arms and anti-armour weaponry were made but all three critical results were implausibly against weaponry (a 1 in 640 chance I think...)] Busting through the green space to the rear of a compound, the first one careens into a tree as it take heavy fire from the rear The second one almost gets there, being immobilised just as it is about to exit! The rebels capture some of the Grid equipment intact - their intelligence officers must work quickly to make best use of the coup
Posted by Donogh at 19:48