A HCPS main battle tank has broken down, straining to climb a steep hill it suffered a loss of power and now it’s immobile and other systems are on the blink. An engineer team and an infantry escort have been sent back to get it back in action. 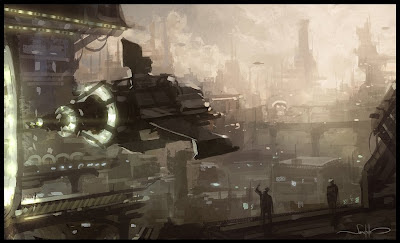 Nearby Sakhan Liberation Army forces have spotted an opportunity to strike at both elements. A Rebel column lies in wait for the relief, they want to bag both halves of the Human Co-Prosperity Sphere mission One unlucky cell gets pounced on by the MICV, which heads off-road and opens up with its machine guns. It's about now that a superstitous dread comes over the tank crew - unless someone actually fires directly at them, their overwatch is going to be very relaxed... The other flank moves quietly through the park along the roadside, they're covering the nearby sniper and anti-tank weapons teams With all the fire being exchange between units in the buildings the the tank, it's no surprise that one of the factories erupts into flame, causing two firmly ensconed rebel units to run out onto the road to get to safety They're cut down as they do so - though the nearer unit seems to be on stims of some sort, as they all continue to trade fire with the HCPS militia across the street! Finally the anti-tank team gets a bead on the immobilised tank and puts a round straight down the spout! The tank's turret flies in the air in what must have been a plasma explosion As the MICV rounds the corner, some of the surviving rebels pinned down in the street react. One steely-nerved rebel takes careful aim with his anti-armour weapon and damages the vehicles drive system before it opens up It's too late for the tank though the militia are glad for an escort back to base. It's been a terrible campaign for the Human Co-Prosperity Sphere, surely High Command will send some decent levels of reinforcement to hold the rebel onslaught and take back Hanhai...
Posted by Donogh at 21:23