Heymans Yamada’s senior executive in Hanhai needs to be extracted from HQ before the entire city comes under SLA control – some HY teams have come under attack since the HCPS has used the corporation to support its effort to secure its assets. 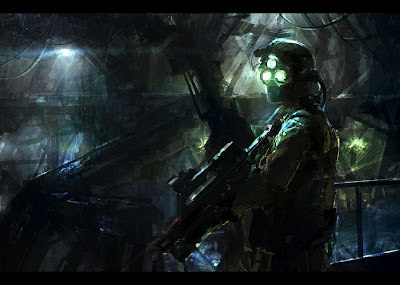 The close protection unit assembles outside the Operational Centre, but there's now signs that it may have to run the gauntlet A short distance away at an ad-hoc landing site, the corporate shuttle awaits. A team (armed with an anti-tank missile launcher) awaits at the barricade and nearby a two-man team equipped with Landmates powersuits patrols With drones deployed and the Executive arriving at the car, the unit is ready to go With the Landmate team trying to figure out what's going on, they won't be heading to help out the Executive's protection team soon. The front team heads behind another structure, giving covering fire as they go One of the Sakhan armoured cars makes a dash across the road, just breaking the security team's missile launcher aimed down its length A team of Sakhans, joined by a gunbot unit lurks in an alleyway, not ready to take on that perimeter security team, but not feeling confident about those Landmates behind them either The powersuits get into the action, cutting a swathe through the Sakhan mercs. With most of the close protection team pinned down, the bodyguards ditch the plan to take the vehicles and start to make their way on foot - presumably the Landmates will join up with them That team, now rooftop gets hit pretty bad - in fact with a heavy ant-tank guided missile send into the building it collapses That building destruction leaves the security teams' defence plan in tatters - and with fire coming in from several angles, there's only a couple of the Heymans Yamada men still standing The team lying in the rubble are overrun, and none are left alive The infantry teams with the gunbots in the alleyway have taken a pasting, but a well-aimed shot from the plasma gun has knocked out and killed one of the powersuit pilots That perimeter team is making good progress, overrunning a Sakhan sniper team and another four-man fireteam in the wooded area by the road At the end, someone's going to lose their job at Heymans Yamada - the mercenaries stuck to their task, and things could have gone either way by the end.
One question remains, how did the Grid get knocked down so easily by the rebels...
Posted by Donogh at 21:31