The other article I wrote for #1 of The Gazebo is this comparative review of two wargaming magazines: Battlegames and Wargames: Soldiers & Strategy

Though the quantitative comparisons tell their own powerful story, that can’t be all there is when contemplating a magazine subscription. There are a few major differences evident between the two magazines.

Editorial Overview
Battlegames, well into its sixth year of publication has a strong editorial voice in Henry Hyde. Published articles all share a little of his ‘old school’ outlook, though this doesn’t prevent fantasy or science fiction material being covered. That Henry’s professional background is in design lends an organic connection between the magazine’s content and its layout and photography. Battlegames nearly went under recently and the last three issues have been published by Atlantic Publishers – though this doesn’t appear to have impacted on the editorial policy at all.

Wargames: Soldiers & Strategy is younger than its current issue number might suggest. Prior to #54 it was owned and run by completely different people (in fact it was a Spanish magazine). As an editor my impression is that Guy Bowers is still finding his feet. Some design elements have been tweaked since the first few issues, for example the two guest columns had darker backgrounds and italic text and were actually relatively difficult to read; that problem’s been fixed. 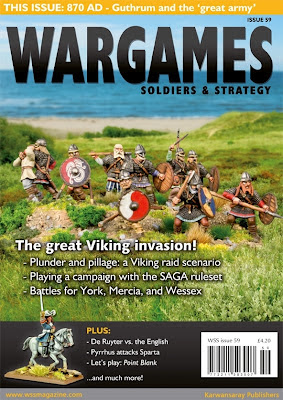 Exactly where the dividing line between a Historical Overview and Scenario lies is probably up for debate, though in broad strokes I think you get a clear picture. Where an in-depth playtest of rules systems has been done, I’ve tended to categorise it with Scenarios, Rules etc. rather than with the standard Reviews.

I’ve converted everything into Euro for easy comparison (but Sterling prices are given below).

Battlegames has established a pattern of articles, with the well-developed scenarios of Tabletop Teasers written by wargaming doyen C.S. Grant giving way recently to the Command Challenges. These are written by a variety of authors and are more diverse in style, so far covering such dissimilar eras as the Western Desert of 1940-42 and the Great Northern War 1700-21.
Other articles can include general wargaming issues (like Chronological Relocation for Scenarios from #27 or Rules and the Eclipse of Generalship from #26). One recent three-part series following a campaign set in 18th Century fictional nation of Grenouisse is well worth a look. There’s usually a scenario or two and an in depth or comparative review which along with a regular feature on modelling projects and the usual reviews to round out each issue.

Wargames: Soldiers & Strategy pursues a different tack, with a theme for each issue (a holdover from its previous incarnation). These run the gamut from niche interests (The Glorious Revolution of 1688 and 1920s Pulp) to more mainstream (Napoleonic Wars and American Civil War). One very useful article in the theme is an overview of suitable miniature lines for the era.  The theme comprises a handful of articles (between four and six), so while it’s a common thread there are as many articles in the issue about something else entirely. An extra couple of scenarios and some modelling articles make up the rest. One aspect of the editorial approach is strongly seen: there’s often quite a lot of historical background in the articles. Worthy of specific mention are the regular columns by well-known games designers Rick Priestley and Richard Clarke.
One note on the reviews; the editor’s quite generous with the space allowed, being half a page for miniature/book reviews or a full page for a game, with a photo or cover image. In Battlegames it’s a tighter arrangement, with three columns of heavy text broken up with the odd image. The Wargames: Soldiers & Strategy approach makes for easier reading and easier searching, but I’m not sure that there’s more content (and I’m not counting words!). 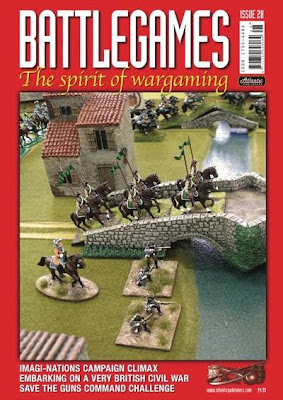 Breakdown
While the quantitative table counting pages of articles is useful (I hope!) a description of the contents of the latest issue may be easier to digest.

#28 of Battlegames contains two modelling articles (making fields and useful tips for the painting novice); two scenarios (French and Indian War and the Napoleonic War); a guide to wargaming A Very British Civil War and the dramatic climax of the Grenouissian Intermezzo.

#59 of Wargames: Soldiers & Strategy contains six articles on the theme of the Viking invasion of England (a brief history, a campaign outline from the Siege of York to the assault on Wessex, a campaign system for Saga, a stand-alone scenario and an overview of suitable miniature lines for Dark Age Britain); three modelling articles (Viking diorama, Napoleon’s Hanoverians and using ‘The Dip’ aka Army Painter’s Quickshade); two playtests (War & Conquest and Point Blank); two scenarios (Pyrrhus vs. Spartans and Anglo-Dutch naval warfare). An interview with the Field of Glory: Napoleonic team and the two regular columns (Rick Priestley on ground scale and Richard Clarke on unit scale) complete the issue.

In #25 of Battlegames Jim Purky guides us through his decision to concentrate on Napoleon’s campaign against Prussia in 1806, and how he came to such a restrained (compared to most of us) outlook on wargaming. He goes through unit size, basing system, army makeup and figure availability.

In #55 of Wargames: Soldiers & Strategy Richard Lloyd writes a step-by-step modelling guide on making sabot bases whereby single-mounted figures can easily be mounted on a good-looking movement tray, one where they’re not too regimented. This one will definitely be take out at some stage over the summer when I have some leisure time for a project.

You certainly can’t fault Henry Hyde for being passionate about a heartfelt cause – he gives a page every issue of Battlegames to highlight his Combat Stress Appeal which supports a helpline for the military community and their families in the UK. With the page count of articles relatively low already it probably represents the only criticism which could be levelled at the magazine – though you may guess I find it difficult to reproach Henry on this front.

One surprising aspect of Wargames: Soldiers & Strategy is the amount of history which is included in articles. Sometimes this is a short introductory piece to a scenario or the initial article for the theme section. Other times however it seems to overwhelm the wargaming aspect of the article altogether. For example, in #56 there is a four-page article on naval wargaming in the Wars of the Roses – we get to the last page of the article before we have a short section on figures and ships and another paragraph on available rules. This is a little infuriating and barely represents a kick-start for the aspiring wargamer.

When it comes down to it my quibble with regard to the amount of history in the magazine just isn’t a strong argument against the magazine – there’s plenty of good wargaming content there too. Wargames: Soldiers & Strategy beats Battlegames hands-down in terms of value for money, but at the end of the day both represent good value for a wargamer with broad tastes. €6/€8 a month gets you both and to my mind that makes a lot of sense. I renewed my subscriptions to both of them in the last few weeks.

You can view and/or print issue #1 from here

If you want to join the attack email me.
Posted by Donogh at 21:54