On Thursday I headed out to my first gaming session since mid-November. Good to get back into things: a few pints, catching up, some discourse on the imminent election and even a game!

Played the third battle from the core scenarios - Vimeiro, 21 August 1808. 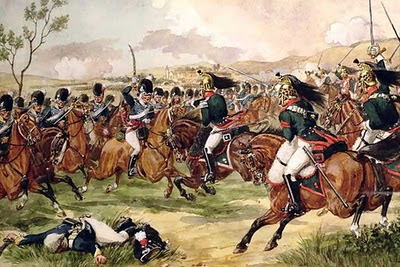 Four days after Wellesley’s initial clash at Rolica, General Jean-Andoche Junot, with an army of 14,000, attacked the Anglo-Portuguese army of 17,000 troops. Junot wanted to defeat the invaders before reinforcements could arrive by sea. The battle of Vimeiro began with three brigades of French advancing to take Vimeiro hill and the town, while a fourth brigade had swung right to turn the British left flank. The French right flank advances on Ventosa - their cavalry and artillery assets do not get involved and British superiority here is established. French light cavalry cover the advance on the left, in between the Maceiro and the hills overlooking Vimeiro The opposing lines clash; British artillery on the heights has been withdrawn due to lack of ammunition, and this makes the French advance easier (though by no means easy) Cold Steel! The heights overlooking Vimeiro are taken by the French by the bayonet! Though making a creditable comeback from 4-0 down, it was a case of too little, too late. The final score was 6-3, though I reckon I might have managed to get to 5 had my light cavalry not been shelled to pieces by the steadfast gunners outside Ventosa.
My initial action at Ventosa wasn't very well executed (though the British accuracy in the long-range fire as I advanced was shockingly good!), and I reckoned my best chance was to quickly move to the left and centre to avoid further losses there.
It almost worked and my attack in the centre may have gotten my opponent a tad worried...

Great to return to C&C Napoleonics after a long absence and definitely one I feel will grow on me as I play more of it.
Posted by Donogh at 17:45