Following the debacle of 1805, the armies of Austria have been reformed and four years later Napoleon faces a far stronger opponent - one which launches a determined attack upon a distracted France. 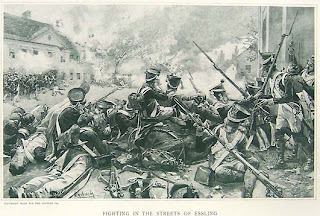 Napoleon's "most brilliant and most skillful manoeuvres" are required to reach victory.

With Laura's routine stabilising it looks like I shall be returning to regular (well once a month or so) wargaming. Initially to play in a free Kriegspiel/Memoir '44 game (thanks to Mr. Kinch) but following that I intend to run a short campaign of the War of the Fifth Coalition (Austria in 1809) using C&C Napoleonics.

John Gill's masterpiece '1809 Thunder on the Danube: Napoleon's defeat of the Habsburgs' (from which I've taken the name) will be my guide.

I'll be recruiting two players to give strategic and political guidance by e-mail and then press willing volunteers on the night to take the role of the battlefield generals.
Posted by Donogh at 08:55