Who could have doubted them? 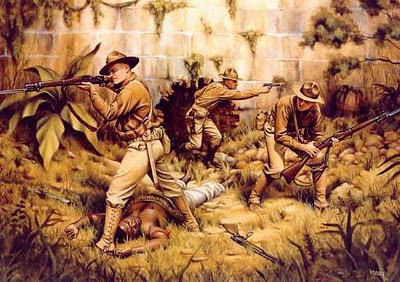 Ten days ago, it looked like the Mobsters had it all sewn up. But the Marine Corps blasted through the opposition and kept going to an unassailable 29-17 victory in the polls!

So I'm off to place an order with Pulp Figures for 3 or 4 packs of Marines and a pack of sailors to keep their gunboat warm. I might even get a pack of mobsters (who can join the other adventurers in the mad dash for evacuation...)

A big "thank you" to everyone who voted.

Working up a C&C Napoleonics scenario for the Battle of Sacile to act as an introductory scenario for my Thunder on the Danube campaign.
Posted by Donogh at 21:00