Long-promised, I will begin running a Force on Force campaign tomorrow set during the Soviet-Afghan War. We'll follow the exploits of a motorised rifle platoon, initially against Zhawar, a Mujahideen logistics base in the Paktia Province in eastern Afghanistan. 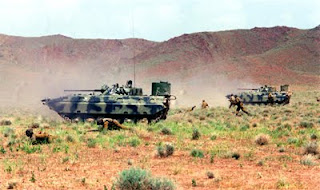 The Soviet-Afghan War was primarily fought on the tactical level, but the strategic focus was a struggle by each side to strangle the others logistics lifeline.

The Mujahideen and Soviets spent a great deal of time and energy defending their logistics network and attacking the other's. The Mujahideen targeted the Soviet lines of communication-the crucial road network over which the Soviet and DRA supplies had to move and ambushed convoys or cut off roads at critical mountain passes. The first Soviet phase was to eliminate Mujahideen support in the countryside.

I'll post a pdf of the first two scenarios when I get back on Monday, and the game reports soon afterwards...
Posted by Donogh at 22:50