Following the capture of Badajoz and Ciudad Rodrigo, Wellington advanced into Spain where Marshal Marmont’s Army of Portugal awaited him. The two armies sparred for position, each looking to catch the other at a disadvantage. When Marmont threatened the British supply lines, Wellington began a retreat, but still looked for an opportunity. On July 22nd, Marmont found a British force in plain view on a ridge and great clouds beyond the hills to the south. Thinking this was just a rearguard, Marmont made a fatal mistake. He extended his army to try and flank the defenders and catch up to what he thought was Wellington’s fleeing main body. 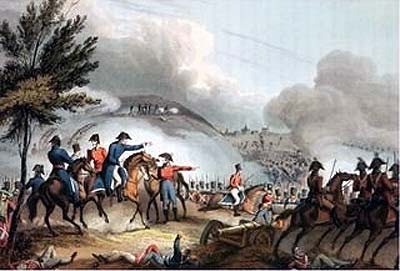 It turned out the “rear guard” was the left flank of Wellington’s army (the clouds were from the baggage train) and Marmont’s army became badly strung out and vulnerable before the hidden allied main body. The French cavalry, along with some artillery move slowly through the woods on the right flank The British, having kep to their ridge, tempt the cavalry to swoop out of the woods and into the flank of the Rifles, foolishly staying in line The Portuguese advance en masse in the centre The French are soon on the ropes and the Portuguese have the scent of a famous victory! The Portuguese General is under fire as the French left, until now spectators join in The Portuguese cavalry on the British right finally move, putting pressure on the French line The French counter attack from the hilltop, flanking one unit and driving them into the river! The French right flank cuts off the Portuguese attack in the centre, which is unsupported by the British reserve units to the rear But to no avail! French stern defence drives the cavalry from the field Victory to the French! Perhaps the rest of the battlefield will favour the British...
Mr. Kinch, our splendid host on the night in question relates events on the other flank
Posted by Donogh at 22:41