I've been writing up scenarios from 'Attack State Red' over the last while. I ran the first three for Trinity Gamers on Saturday.

A Company’s platoons are scattered around the deserted eastern part of Nowzad. With the prospect of the Taliban outflanking the British troops, securing against possible infiltration is vital. 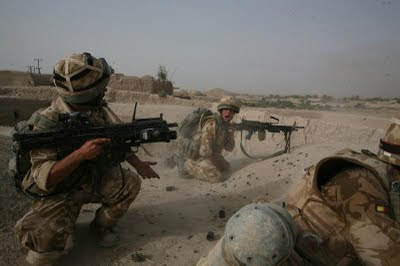 Company HQ, despite the prospect of danger moves up to a rooftop to direct mortar fire The rest of the Taliban join the charge, hoping to overwhelm the British defence of this area, Holmes has gotten out of Dodge, but despite taking fire on the way to the nearby building, safely reaches it without any injury A Chechen sniper team has shown up, well out of range of any local units, and proceeds to wreak havoc on the British section to the rear Taliban motorbikes appear (in the newly named "Forest of Death"), but they are picked off before they get a chance to put their RPG to good use That fireteam comes under immediate threat, as the "hunter of gunmen" knock out two of them and the rest are put down by a Taliban group from the woods nearby. Another group enters the building - capturing one and finishing off three They fire on another set of motorcyclists, moving in to execute the lone survivor of the fireteam who was nearly captured Another attempt to capture that squaddie is decline, as a lone Taliban leader enters the building to shoot the stricken soldier Five dead and one seriously wounded British soldiers (but miraculously not Holmes or his GPMG gunner!) make this a bad day for the British. They do maintain the connection between the two platoons and keep Company HQ safe, thus winning the game by 19-16.

Lesson for the day: the lack of nearby support for that fireteam meant that no one was available to give first aid, leading directly to the attempted Taliban capture.
Posted by Donogh at 12:01