The Battle of Maida

Before my first game of Force-on-Force at Leprecon I played Kinch's Command & Colours: Napoleonics game. 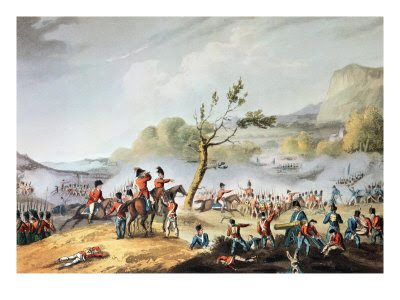 The armies clash at Maida French Lights advance through the woods on their left flank. This advance does not go well - one of them has left vital equipment back in their baggage and the other is quickly overwhelmed by fire and pushed back The French line is bombarded by the British guns, to some effect, though it is not decisive British guns ready grapeshot for the French are closing quickly, having driven off another British battalion British square repulses French light cavalry, but the nearby French infantry takes advantage of this manoeuvre to pour fire into their ranks, wiping out the battalion and killing Colonel Cole At much the same time at this serious reverse occurs for the British another battalion in the centre is caught by a double column attack and smashed. Colonel Oswald dies in the rout The British have been driven from the field, in a most decisive manner!

Although the score was 6-2 there were some seriously depleted French units (specifically on the left, where several were withdrawn)

Thankfully there was little need for these French casualty markers...