With the battle for Garmsir lost, Taliban forces are attempting to escape the cordon which ISAF have set up. 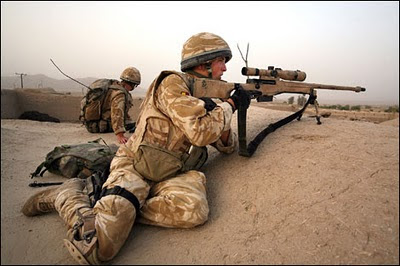 A British platoon close in, coming across the fields towards the town wall. The large Taliban group in the marketplace has been joined by a heavy machine gun, and it is on this group that most of the British fire is concentrated on Fire exchanged as British advance through the poppy fields. A dust storm kicks up reducing any British advantage in range, especially for the sniper. British gain high ground overlooking trees. Though at this stage the GPMG team and its supporting fireteam can't draw a bead on the Taliban inside the orchard. As that group withdraws (exit stage left as it were) the WMIK burns rubber, hurtling through the gate and around the corner. It trains its gun on the Taliban, but they beat it to the punch. One crewmember is killed and the rest bail out as the land rover is immobilised. As they rush for cover across the street a new group pops up on the compound rooftop and catches them in open ground. They are now at the mercy of whatever Taliban chooses to advance, as there are no nearby British units British clear house, while one of the team is downed on the way in the rest breach the house, killing all remaining Taliban along with their leader (that loudhailer is definitely not a luck thing to carry!) Having had two successful close assaults (a fireteam against 3 or 4 Taliban each time) and fearing that the large remaining Taliban unit is about to get clean away an ill-considered bayonet charge occurs. The four unfortunates are gunned down by the Taliban as they reach the archway With three of their number advancing to engage the sniper team around the corner, the other four execute the wounded marines. [Worryingly for the British player, we are now running out of casualty figures] That group continues to take punishment from the lone GPMG gunner in the trees, but they stand firm and finish him off - there are but two Taliban left in this group now. The sniper team has advanced so far that its now at point blank range. All in an attempt to protect their wounded comrades Meanwhile the rest of the British force is clearing hotspots and remaining Taliban holdouts, as well as rescuing the WMIK crew. These civilians though fled into the compound when the WMIK arrived outside in a hail of fire. So there we have it. I think a draw overall, or maybe a marginal victory for the Taliban - they lost their esteemed leader, but inflicted some serious casualties on the British (Won 2, Lost 2 over the weekend). I had a blast, getting players for each of my slots easily enough, and playing with some people who've been threatening for ages.

[You may notice I used the same layout as in the previous scenario - that was planned, given the frenetic pace I had to do set-ups at Gaelcon, I decided well in advance to give myself a bit of an easy time on Sunday afternoon]

I'll be posting a pdf of the campaign (nothing as complex as Wilson's Wadi) tomorrow or Saturday. Thanks for reading!
Posted by Donogh at 13:08