A British mission to snatch a Person-of-Interest in Garmsir seems to be going to plan. But Murphy’s Law applies in spades as everything which can go wrong, does go wrong.
A ‘Perfect Storm’ of battlefield friction hits the operation: a downed chopper, a well-staged ambush of a column at a choke-point and higher-than-expected resistance makes this a very black day in Garmsir.

MISSION BRIEF
Intelligence assets have identified a senior Al-Qaeda figure hiding out in Garmsir. A cordon has been thrown around the area, and a platoon of Royal Marines has been sent in to capture the person-of-interest. TALIBAN MISSION OBJECTIVE
Destroy the British invaders and ensure that your leader escapes their cowardly attacks.

TABLE SET UP
A high density urban area bordered by poppy fields and overlooked by a broken ridgeline. 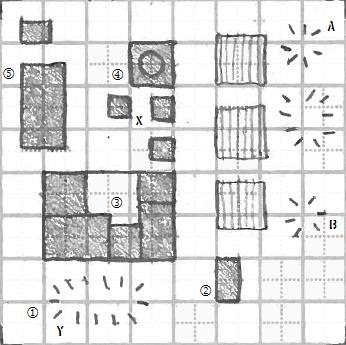 Deploy the British on a line from A to B,
Deploy the Taliban Senior Leader in any of the buildings at X.
Deploy the Technical at Y and the remaining units on the Hotspots, with not more than one unit at any location.

All Taliban forces are Locals. They have normal supply and have high confidence (TQ D6 Morale D8)

Insurgency level is 4 and a D6 roll must be made lower than 4 to bring forces on to the table. If successful, the Taliban player rolls 2d6 and consults the Reinforcement Table.

Taliban units are not subject to Shrinkage

The Senior Taliban Leader has made a plan for his Extraction and will stick to it. He will only leave his building when the Technical arrives or when the British have made contact with him and his bodyguard. If the Technical is taken out he can make a quality check to move out.

The hotspots link Tunnels which run underneath Garmsir. A Taliban unit may spend its entire activation moving from one hotspot to another.

Dog Teams can automatically detect IEDs or hidden units within 8”.
They prevent out-of-contact movement or the use of any hotspot inside that radius also.
They add +1 to checks to disperse civilian mobs.


All four scenarios of the campaign are available here
Posted by Donogh at 22:15