In April 1809, Archduke John invaded north-eastern Italy in conjunction with the Austrian advance into Germany. On 15 April at Pordenone, the Austrian advance guard routed the French rear guard, inflicting heavy losses. Undeterred by this setback and believing he enjoyed a numerical superiority over his opponents, Eugène attacked the Austrians east of Sacile the following day. Though the two sides were equal in numbers of foot soldiers, the Austrians possessed a two-to-one advantage in cavalry. 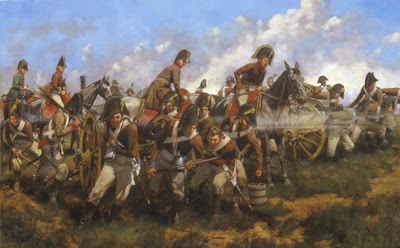 I couldn't figure out how to place labels on the map.
Fontana Freda is the town occupied by an Austrian Light infantry unit in the centre of the map. The bridge is just beside it.
Sacile is the town at the bottom of the map, the French Line Infantry with the general are occupying the hex with the bridge.
The Artillery on the Austrian left is occupying another bridge.

I don't think there are this many bridges in the hex mix, but marking two of them with relevant VP markers should suffice.

Obviously I've had to use the British as Austrians and the Portuguese as Italians.

While both Archduke John and Eugene were notoriously poor generals, I reckoned that playing this with a hand of four cards would've been torturous...
Posted by Donogh at 12:54