Neither Guns nor Prisoners

In preparation for playing the 1809 campaign, and specifically for the Sacile scenario, I had to come up with some national rulings for the Austrians. 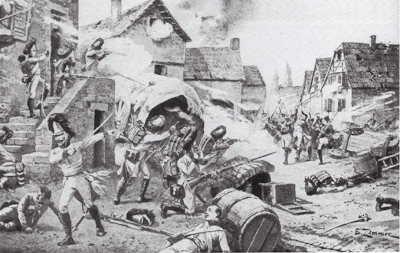 The 1809 Campaign was only a marginal victory for Napoleon, at least militarily. Austrian troops acquitted themselves creditably on the fields of Aspern-Essling and Wagram, especially given their performance only four years previously. Aspern-Essling was the first time in over a decade that Napoleon had tasted defeat.

General opinion of the Austrians throughout the Napoleonic period is quite ppoor, but Napoleon is more more appreciative of their strengths than the average wargamer.

Following Wagram, Napoleon said "War was never like this, neither guns nor prisoners. This day will have no result." The French suffered more casualties at Wagram than the Austrians did.

On his return to Paris, one of Napoleon's minister was contemptuous of the Austrians, but Napoleon's rebuke: "It is evident that you were not at Wagram" spoke of his new-found regard for them.

The Austrian Army
A command card cannot be played directly from hand. It must be placed in preparation for the next turn. Scout, Counter-Attack and First-Strike cards are exceptions; they can be played as normal. [1]

Fusiliers (Line Infantry)
4 Stands
Move 1 and battle
A line infantry unit which did not move will have 1 additional battle die in ranged combat. [2]

Cavalry
All cavalry units have 4 Stands [4] 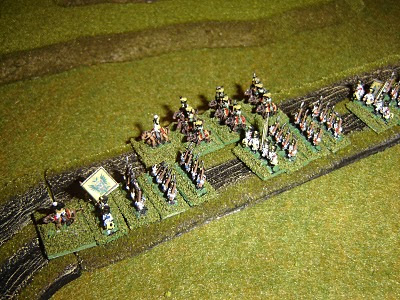 Rules Explanations:
1. Austrian command was still stymied by the lack of initiative shown by officers. In many ways it was still stuck in the mid-to-late 18th century.

2. Austrian Brigades had light (3 or 4-pound) batteries attached. Before the reforms arising out of the debacle of 1805 these seem to have been used in a manner resembling mid-18th century practice. While the move was to have fewer calibres used in a more modern way, in 1809 the artillery arm was still in transition.
Coupled with the fact that the Austrian army was better in defensive duties, both operationally and tactically.

3. Grenzers were a hybrid of line and light infantry, and the practice may have been suitable for frontier warfare, but in battle it was probably the worst of both worlds.

4. Austrian cavalry was certainly a match for its French counterparts, though it may not have been used en masse in as effective a way as their opponents.

I'll have to be somewhat harsher if I do Austerlitz and the 1805 campaign, but these seemed to work well the other night.

I will post the Battle of Sacile scenario in a couple of days. Unfortunately I didn't have my camera the other night, I took some poor pictures on my phone so I may do a re-staging of it...
Posted by Donogh at 21:27