Early on July 22, Marmont's army was moving south, with its leading elements southeast of Salamanca. To the west, the Marshal could see Wellington's 7th Division deployed on a ridge. Spotting a dust cloud in the distance, Marmont surmised that most of the British army was in retreat and that he faced only a rearguard. He planned to move his French army south, then west to turn the British right flank. 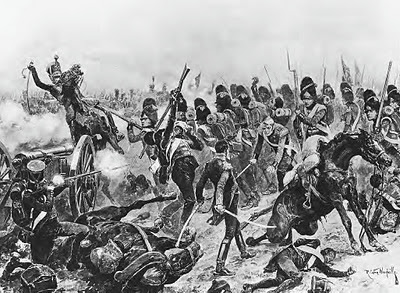 Marmont was mistaken. Wellington actually had most of his divisions hidden behind the ridge. His 3rd and 5th Divisions would soon arrive from Salamanca. The British left crosses the Algabete, with the proverbial wind behind them this Division makes a serious attempt to destroy the French here The French storm through the British centre, sending the 'Halberdiers' reeling backwards and splitting the Anglo-Portuguese army in twain The massed cavalry on the British right make attack after attack, but they are fended off and sent packing by the French line The Grenadiers combine with the 'Drogheda Cossacks' to send the advance French battalions back to hell! But is it enough to win the day? On the left, the British sweep back across the river, with the loss of some guns but inflicting serious damage on the French over the hill It is not enough, and the French surge to victory on the British right, taking the honours.

This scenario was played three times over the weekend, this time going to the French 12-8; in the afternoon it was 12-10 to the French, but on Sunday the British restored their honour with a 12-9 victory.
Posted by Donogh at 21:52