The Johnston Mission is located in an idyllic clearing, and everything seems peaceful. 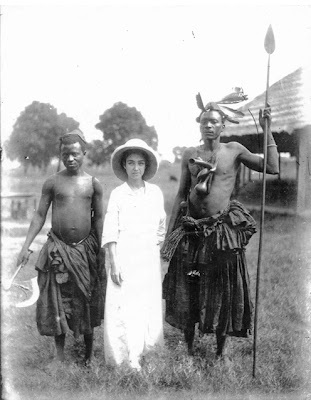 The Askari brigands exit the clearing, heading straight for the creatures; but the Raptors close quickly A large Achillobator stalks through the jungle Captain Lewis, along with his sister and her husband Reverend Johnston race for the car. However in the scramble to get into the car Lewis discharges his pistol and hits his brother-in-law (only the man's sturdy cap saves him from a serious wound). Lewis bundles him into the car to recover from his concussion He's followed by another Askari - Tehpoe, who is caught from behind by a Raptor The crafty Achillobator sneaks into the shed, and approaches the parked car The Askari has scurried up the chimney to safety, but the Achillobator clambered up onto the roof after him! Tehpoe is outnumbered, but somehow manages to kill one of the Raptors Tehpoe is finally slain by one of the surviving Raptors The two Raptors here are being fended off by the Reverend, but they seem to spot easier prey in Mrs Johnston racing after her, her attempts to defend herself result in a lost shotgun and she shrieks in terror to run blindly into the jungle The badly wounded Achillobator, having eaten the Askari on the rooftop, struggles to descend until Lewis' car stalls just beside the house The Reverend Johnston, striding purposefully to kill a Raptor is blindsided by the wounded Achillobator Taking cover behind some boxes Lewis and Johnston fend off the remaining two beasts, who slink off into the jungle But what will happen to Mrs. Johnston, alone in the jungle and without anything to defend herself with?
Posted by Donogh at 21:55