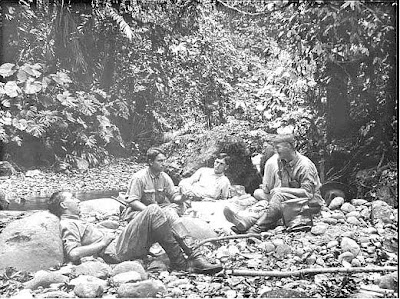 Their camp with sentries on duty - Peters stands with Kofi and Kwesi at the fire, as the porters bring in the last of the supplies Winters and Cockburn blaze away with their guns at the Raptors, but both men go down. Nkunda, their local guide throws his spear at a Raptor in desperation - it hits the Raptor in the eye, sending it scampering backwards (along with his spear) Kofi points at the Raptors and the sentries open fire The Raptors move away from the seriously wounded men and towards the campsite - picking on Chandler and Peters. Nkunda is running back to the camp to pick up a machete and the boy Hal runs to Chandler's aid with his shotgun The Allosaurus looks in over the ridgeline A firing line is formed by the men, with Chandler at the rear waving his pisto around - the Allosaurus has jumped the ridge with amazing agility The concerted fire from the men is too much for the Raptors and they skulk off into the undergrowth. With time on their hands the men concentrate on the Allosaurus (Nkunda's machete doing serious damage to its leg) As thing calm down, Nkunda is overwhelmed by the Raptors They move on, and the porters are easy picking for them Well Oscar, this is a fine mess you've gotten me into! As the Allosaurus leaves the campsite, weakend from Sampson's unyielding fire, a last gasp shot from his rifle strikes true and the Allosaur is killed A terrible day for the adventurers, though some of them are only seriously wounded, without the porters they have little chance of surviving - even the Mission will give them little succour without anyone to help them
Posted by Donogh at 22:03