With the Spinosaurus steaks tidied away, these legitimate businessmen can return to their negotiations. 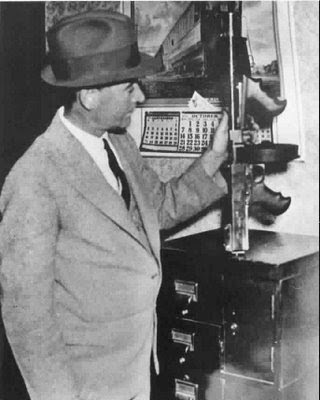 The men retreat behind some boxes, preparing their Alamo - but the beasts are smarter than that and approach from around the back! One of them goes down, and the rest use the feeding frenzy as an opportunity to leg it - they stop, turn around the let the beasts have it One of the Raptors, who had remained hidden during the initial rush, creeps out behind Reilly and tries to snap his legs off. The wily hitman twirls away and runs, shooting off most of his tommy gun's drum as he does so Dillahunt, who thought he was safe in the water tower finds something else up there with him Yates and Salvatore close the door of the house, and the first Raptor to stick his nose inside gets it shot off Reilly and Dillahunt brave the danger, taking to the cars - two Raptors by the storehouse get an unpleasant surprise as the vehicles try to run them over! Reilly takes care of his target, but the other Raptors avoids the hurtling car and snaps at Dillahunt - in his attempt to avoid the jaws, Dillahunt loses control of the car and it flips over, rolling over the unfortunate mobster Reilly gets out of the car and runs into the storehouse, taking out another of the Raptors as he goes - two more are nearby but can't seem to make out his scent amongst the heady stench of rum The last Raptor is put down like a dog Tommy guns seem to do fine after all!
That was all I had time for at Gaelcon - though I did get to play some of the Wild Geese's Three Musketeers game, Conrad Kinch's Battle of Salamanca. Thanks for reading!
Posted by Donogh at 21:59