The Search for Mrs Johnston

Sampson and Kofi join forces with Lewis and the Reverend Johnston 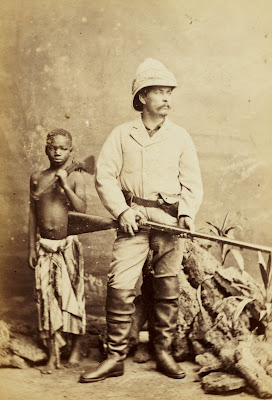 Mrs Johnston, still without a weapon, runs into some Askari - these are the rest of the brigands led by the infamous DuPont Rev. Johnston is jumped by a native out of nowhere - he manages to utilise his full array of missionary talents (12 gauge) to subdue the man DuPont takes charge, telling Mrs Johnston to stay in his camp until he sorts things out Taking direction from DuPont the Askari fan out Achillobators stalk slowly around the side of the small camp The leading Achillobator is ambushed by the Askari - their muskets bring it to the ground but have little effect. DuPont takes careful aim and kills the beast stone dead The Askari melt into the jungle to creep away, but the Raptors come after them - they try to shoot them from cover but in so close their muskets are more of a hindrance As the search party and Mrs Johnston are reunited, they also sneak off, but DuPont comes out of cover to aid his Askari - spooked by his stealthy movement, an Askari opens fire: slaying the Frenchman with a single musket ball! Sampson lead them out of danger, staying hidden with Lewis bringing up the rear The remaining Achillobator chases, spotting them as it approaches - chaos breaks out with some panicking and others running In the bedlam, the beast attacks Mrs Johnston. It kills her leaving Sampson to run after the rest A sad end to the day - the indefatigable Mrs Johnston almost made it
Posted by Donogh at 21:42