The first of the three Perilous Trail! scenarios I ran at Leprecon at the weekend. 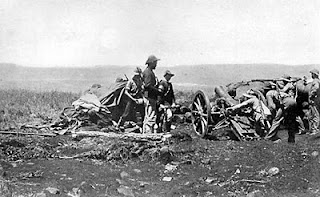 Not knowing how long they must wait for relief, the Americans choose their defensive position very carefully. Two areas of broken ground command river fords with a fall back position to a large jungle area. They spot a new type of terrible beast, a pack of three Carnosaurs pick their way carefully through the jungle as they exit a valley This new menace seem oblivious to the danger of the American's field gun, as it spots them moving through a gap in the jungle and opens fire. The Tyrannosaurs have been more cautious, moving through the high grasses towards the ford and not exposing themselves except in short bursts The field gun drops a Carnosaur straight away, and its pack mates take instant heed of this and rush over towards where the Tyrannosaurs are crossing the river The first Tyrannosaur makes a bee-line for the American Hero, but takes a whole magazine from his Tommy Gun in the face The other Carnosaurs and the remaining Tyrannosaur rush the cluster of Americans in the rocky ground. One foolish Carnosaurs decides to take a wander over to try to catch the field gun unawares but takes canister straight to the torso and bleeds out flailing amongst the razor-sharp rocks.
The other dinosaurs are hit with a concerted volley from the Americans and they are put down easily enough in the end. The Americans grin, they've dealt with mass dinosaur assault without taking a single casualty. They'll have to think of something smart to say to the relief column when it arrives...
Posted by Donogh at 10:52