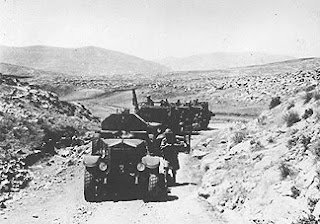 While the US Marines have not yet been able to make the trip from Liberia, a American DH-4 (designated O2B-1) from the Naval forces there has made the trip to help locate the wayward adventurers The aggressive pilot steers directly for the Pteradactyls on the plateau and opens fire. The Pteradactyls react in anger encircling the aircraft but the rear-gunner takes care of one of them and the other is forced to land Meanwhile the Americans are distraught when the relief column (heard in the distance) doesn't arrive through the jungle valleys, but rather a pack of Carnosaurs, racing a pair of Tyrannosaurs towards them The relief column drives at full tilt through the high grasses, catching up on Raptors and a Spinsosaurus making their way at the Americans. Whether it's panic or some other nervousness neither the British nor the Americans open fire at this stage, despite the overwhelming numbers of Dinosaurs in view The Americans have camouflaged their positions well, and the holding of their fire causes the Dinosaurs to slow down and begin a search [at this stage after seeing Graham roll a series of '1's and '2's on criticals, Colin suggests that he just roll higher - the strategy works!] Meanwhile, the Spinosaurus has noticed the column of vehicles and has set about them, wreaking havoc. Flipping and destroying a truck (although the passengers leap to safety) and completely wreaking the armoured car, which explodes due to some freak accident Just as the crew of the Field Gun sweep the camouflage netting aside to fire point blank at a Carnosaur, fearsome and monstrous grubs begin to crawl out of the nearby slime, almost panicking the startled gunners. They stick to the task and pummel the terrifying beast with a few shells The remaining British disembark from the touring car and truck to take on a Carnosaur. They must fight their way through before the Americans are overwhelmed! Just as they begin to make headway, a giant spider creeps out of the jungle to assail Frazier (whose aversion to spiders from service in the Far East is well known) The first Tyrannosaur takes a powerful shot in the head from the field gun, and the other nearby beasts begin to think better of approaching its front arc of fire A Carnosaur and some Raptors fight over Drake, the remaining American leader. His bravery seems to be without end, but a Raptor attack ends up in his fearsome Tommy Gun being ripped from his hands. The more intelligent Raptor curiously looks over at it, but before any action can be taken Drake pulls out his Browning pistol and continues his doomed struggle The remaining Pteradactyl glides over and lands on a tree overlooking the fight. It chooses its moment to swoop in, killing one of the remaining British adventurers in a single pass ALthough its strafing run is effective in killing a Carnosaur it passes too low to the fight, and the Tyrannosaur leaps up in an attempt to get rid of this nagging machine. The bite takes a chunk out of the planes tail section and as the gunner continues to provide suppressing fire, all the remaining adventurers are overwhelmed With solid evidence in the form of a masticated rudder, the navy pilot returns to the coast to report the expeditions fate back to the Marine contingent...
Posted by Donogh at 22:22