This is the campaign background for my 2010 Project over on The Guild.
I'm going to use Ambush Alley's upcoming sci-fi rules and I'm taking my 25mm GZG figures out of long-term storage. Painting them up will be the rest of the tasks for the project. 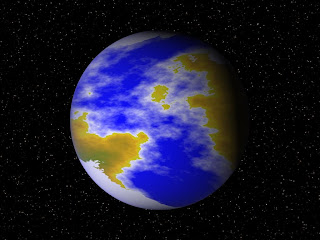 HISTORY OF THE COLONY

Following the development of McKernan-Saito Manifold Dimensional Wormhole technology in 2155 a US military probe was sent to the system due to the presence of a large gas giant in the star's habitable zone. It discovered an earth-like moon in orbit around the red gas giant. Catalogued as BYI 071 c4 it retained that name until 2181 when a Swedish expedition (under the auspices of the European Federation) made planetfall, renaming it Langeforsstad after the expedition’s main sponsor Erik Langefors.
With the discovery in 2189 of Cochin 3+, a compound used in desalination the colony became commercially viable, and has been responsible for transforming New Boliden into one of the most profitable and influential interstellar corporations in existence.

A Chinese expedition under the aegis of the Human Co-Prosperity Sphere (HCPS) arrived in system in 2206, much to the consternation of the InterStellar American Union (ISAU), which had thought the HCPS’ power much reduced by the First Solar War (2188-2201).
The HCPS promptly established a station orbiting the gas giant and set up a small research colony on the moon’s southern continent. The ISAU was too embroiled in maintaining order throughout the inner core of systems to intervene, and while the battle cruiser USS Pershing performed a brief “show the flag” exercise in the sector in 2211 no impact was had on the increasing Chinese presence in the system.

In 2221 rich deposits of Iridium were discovered on the ‘eastern’ peninsula of Langesforsstad’s southern continent. Given Iridium’s growing importance in spacecraft’s fuel and propulsion systems as well as experimental weapons systems the establishment of a large mining project there was given a high priority by the HCPS.

A large population from the Sakha region (under Chinese hegemony since the Sino-Neo Soviet War (2137-2152)) was transplanted directly to the newly renamed Novaya Sakha peninsula. The Iridium mining project became fully operational in 2234. Production levels in 2241 reached their long-term target of 4,750 kgs.

While the Swedish have greatly expanded their settlement area, with some small satellite colonies, no other power has founded any colonies. Both the ISAU and the Heymans-Yamada Corporation have established monitoring stations in system. 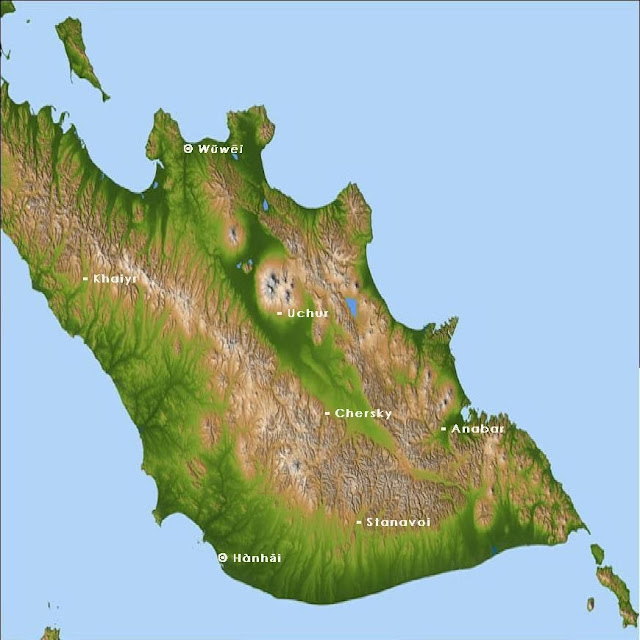 Geography
The Novaya Sakha peninsula is at the very southern extreme of its continent. Its southern coastline is ice-locked for most of the winter, and local conditions are very harsh for almost half the year (or rather the gas giant's “Muspell” year).
A central mountain range dominates the peninsula, running down its entire spine.
There are significant lowlands to the south of the mountains, with several major river valleys helping create much-needed land suitable for farming. This territory is severely affected during the winter, especially the south-eastern section.
North of the mountain range, the terrain is much more broken, with a minor mountain range and several lakes closer to the coast.
The whole region is littered with the igneous deposits which typify the presence of Iridium.

Economy
The economy revolves entirely around the Iridium industry, although some indigenous manufacturing has been built up utilizing the large quantities of nickel and copper which aren't profitable to export off-world.

Politics
Novaya Sakha is classed as an Autonomous Prefecture of the Human Co-Prosperity Sphere, and is ruled by a Governor, Duan Peng. While ruling through the Prefecture's committee, and legally not responsible to anyone on-world, the Governor relies heavily of the Committee Secretary Dai Xue.
Duan Peng is known as a favourite of a powerful Central Committee member back on Earth, but his mettle is untested. Dai Xeu is held to be a canny bureaucrat, but she can't be too canny or she wouldn't have ended up here...

Military
The military presence on Novaya Sakha is sparse, given the lack of any strategic assets in system as well as the low likelihood the European Federation would cause trouble. With tensions high in the Core Systems, there's little leeway to improve matters here. A naval cruiser makes a visit every six months or so to escort the latest Iridium shipment back to Earth.
There are three garrison battalions on the ground. Split between the two regional capitals at Wuwei and Hanhai and the frontier. They are responsible for maintaining a security perimeter with the rest of the continent, as well as garrisoning the main mining centres.

With the outbreak of the Second Solar War (2247-2251) and the general spillover into the First InterSolar War (2251-2259) demand for Iridium reached an all-time high. Production on Novaya Sakha was pushed to reach the highest sustainable targets.
A slippage in living standards was probably inevitable, and health and safety regulations were eased to maximise efficiencies. Trouble began to brew when despite great rewards for the Prefecture Committee, no rewards were passed on to the general population. All the changes which had been espoused as necessary for the greater war effort were kept in place.

Fyodor Sokolov led the negotiation efforts to bring extra benefits to the population or to reduce the short and long-term dangers his people faced to a more reasonable level. Lack of any real engagement led to a growing militant faction within the local community.
The arrest of a youth who violated mining security regulations to post anti-government slogans led to a violent backlash against government security forces, where upon the Prefecture Committee asked for military aid in quelling any disturbances.
A mining worker's collective formed in an effort to use Iridium's importance against the government as a next stage in the negotiations, but Duan Peng immediately responded by declaring martial law. When Fyodor Sokolov presented himself as the moutpiece of the collective, he was arrested, tried and executed for acts contrary to the prosperity of humanity.

The Prefecture Committee believed that they had restored order to the region, but by 2268 it was clear that they had merely driven the movement underground.
The 2268 shipment of Iridium had been almost entirely stolen, a shipment of disguised nickel had replaced it and the ruse had not been discovered until quality control in orbit around Earth.

Each of the main settlements had formed a cell, which formed its own military column, varying in strength from 100 to 150. They were armed with basic military surplus from a number of the warring factions of the First InterSolar War, using funds from the blackmarket sale of the stolen Iridium. They have also hired a number of the Sakhan Mercenaries famous for service with the Neo-Soviets and the HCPS amongst others.

The leader of the resistance is believed to be Aysen Okhlopkov, but his whereabouts are currently unknown...
Posted by Donogh at 19:15