The second of the three Perilous Trail! scenarios I ran at Leprecon last weekend 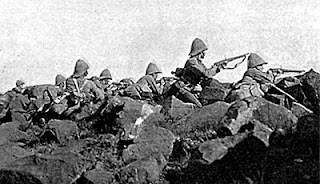 A British column scouts ahead of the main force, looking for any sign of the Americans' location. The search party exits a dense jungle area to come upon a wide variety of creatures in open grassland The British, led by Major Jones make their way around a jungle outcrop A pair of Pterodactyls circle around a high rock formation, waiting for suitable sized prey to show itself at the small lake, but the adventurers look like they'll do The slow by armoured Edmontons guard their nest at the edge of the plateau, they'll take up a defensive position at the escarpment but will not be threatened The smaller Styracosaurs graze in the high grass, keenly aware of the Raptors which lurk up a gully nearby The two separate search columns merge near rocky ground into a rough line to deal with the dinosaurs moving in their general direction. Some British fire discipline will sort them out Without any nearby targets but getting itchy trigger fingers the right flank opens fire on the Iguanadons who were supping out of the small lake. They're spooked by the gunshots and run away A Spinosaurus, which had been roaming the area charges out of the high grass towards the British line It survives the torrent of fire to hurtle into the adventurers, but the British have the measure of the beast and keep it at bay, damaging its claws. Meanwhile a wily infantryman has worked his way around the back of the Spinosaur to take a shot from there Chaos ensues as the Raptors scuttle out of the high grass to leap on the adventurers closest them just as a Triceratops lumbers out of hiding nearby to attack. The Pteradactyls' threat is dealt with calmly as Jones pistols one just as it swoops in to take off his head The left-hand column causes dismay amongst the others as it cuts and runs! Some of the slain are being feasted on by the hungry carnivores and it's every man for himself The Triceratops' bellow scares the living daylights out of the Adventurer and he runs for cover. Somehow the ponderous Triceratops finds a burst of speed and catches up to gore him mercilessly into the ground As Jones rides away the second Pteradactyl glides in silently to skewer the mounted man, but Jones turns in the saddle to effortessly shoot it stone cold dead Jones is having a crisis of conscience and rather than continue in his flight, turns his horse around to ride back and save the day. His return is upset by a Raptor who jumps out of hiding just as he rides past a patch of grass. He doesn't have a chance to even turn his pistol at it. He just utters two last word: "Clever girl!" Not a soul amongst the search columns is left alive, and so the Americans must hold out a little longer as the British adventurers struggle to find them
Posted by Donogh at 13:13