Now we must make a defence! - Scenario

Over on A Wargaming Odyssey, Ogre Fencer posed the question of what films inspired wargamers to wargame. Zulu came out a firm favourite, though I didn't mention it myself. Don't get me wrong, it's a film I'll watch at the drop of a hat, but it just doesn't crank me up to wargame. Certainly I've never been tempted to wargame Rorke's Drift itself.

However...Shawn is running a 'To the Last Round' scenario competition over on the Ambush Alley Forum. I thought I'd put my hat in the ring, with not a little hat-tip to Zulu. 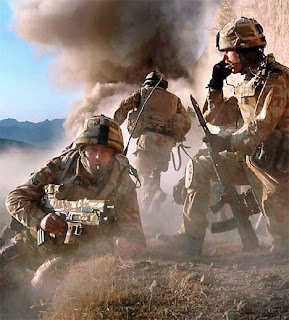 "Now we must make a defence!"
- 12 Turns -
MISSION BRIEF
A major Taliban attack on the vital town of Musa Qala has threatened the entire British position in the area. A small patrol has been overrun and it has taken refuge in a small compound. While it was ignored in the initial surge, it has now attracted the attention of a large body of Taliban nearby and with little hope of relief from the main body the British section must defend to the last round!

BRITISH MISSION OBJECTIVE
You’re too far from your main lines for escape to be an option. You must hold out until relief can arrive.

TALIBAN MISSION OBJECTIVE
While the main attack deals with the British garrison, this small group of soldiers must be eliminated or captured to give the cause a major victory.


TABLE SET UP
A pre-dominantly sprawling urban set up, with a lot of walls forming narrow alleyways. A copse of woods lies beside a bazaar, and beyond that runs a small drainage ditch separating the town from poppy fields. Near the strongholds selected by the British are a dilapidated tomb and a walled compound 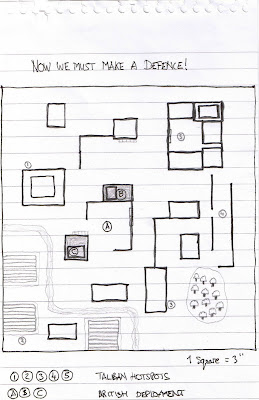 Deploy the British anywhere in A, B or C
Deploy the Taliban on any of their hotspots.

All Taliban forces are Tier-1. They have normal supply and have high confidence (TQ D8 Morale D10)

Insurgency level is 5 and a d6 roll must be made lower than 5 to bring forces on to the table. If successful, the Taliban player rolls 2d6 and consults the Reinforcement Table.

FOG OF WAR
The British force draws a single Fog of War card at the start of Turn 1, and thereafter Fog of War cards are drawn as normal after Reaction Tests.

ASSETS
The British force starts with no assets.

The British commander has identified two buildings as strongholds. It is here that supplies and the wounded are kept, and it is these buildings that have been identified as fall-back positions.
If either building is taken then the British automatically fail both the next supply and confidence tests.
If both buildings are taken then the British immediately lose a supply and confidence level.
The British have codenamed their strongholds ‘Bromhead’ and ‘Chard’. [Marked as B and C on the map]

Supply Test: Roll TQ for all soldiers still combat-effective. If more successes than failures, then maintain supply state. If not then reduce level one step.

Confidence Test: Roll Morale for all soldiers still combat-effective. If more successes than failures, then maintain confidence level. If not then reduce level one step.