Eamon and Steve were over at the weekend for our annual birthday celebrations. Neither had played Ambush Alley before, so before the main planned game I setup something small to get them used to the rules. 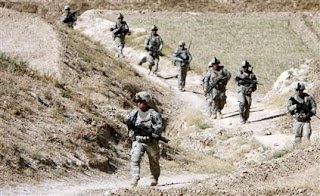 An American squad enters a small village along a track, two small groups of Taliban occupy the outskirts and more could be on the way. The squad should establish a strong foothold in the village to assess the strength of the opposition and await for further instructions. The 1st Fire Team, lead by the squad sergeant moves along the village's outside wall. It stays near the gate, just in case an opportunity presents itself to advance quickly across the village square, but it's intending to continue around the corner to close down insurgent activity at the hotspot.

The other fire team maintains a presence where some elephant grass has broken through the wall and covers that side of the village. Meanwhile a Taliban group which had been overlooking that advance was drawn into an ill-advised firefight with the Americans. Its survivors flee to join up with another group behind cover The 2nd Fire Team moves through the gap in the wall and takes up position in a house. A protracted firefight breaks out between them´and the Taliban groups in the area and all members of the team are seriously wounded. A group of Taliban arrive out of a rat-run just as the Americans set it up with C4. A fierce battle breaks out but American training and steely resolve wins out. The Americans wipe out the new arrivals and shut down the hotspot. Good first run-through with the lads. Bigger games from Saturday and Sunday to follow...
Posted by Donogh at 12:30