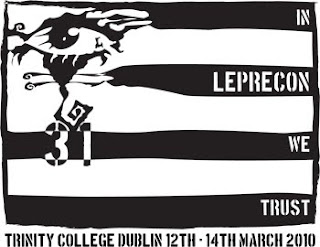 Wargaming at Leprecon was pretty subdued this year. There was the usual Warmachine and 40K tournaments (though they seemed unusually small this year). There was some BattleTech and I had a good chat with the guys about some of the upcoming releases (especially the historical hot-spots - Galtor III brings back good memories) along with some reminisences of various large-scale games.

Eamon (Joy and Forgetfulness) ran a few games of En Avant! Some ill-advised unsupported cavalry charges and piecemeal attacks, but the biscuit was well and truly taken by this decisive column attack by the British on a French line! Bought a handful of these small duckies off Emma - here they are swimming around in a muddy puddle. They're already a big hit with Isabel! I ran three games of Perilous Trail! over the weekend, more of which anon.
All in all, a successful and enjoyable convention for me.
Posted by Donogh at 12:26