Here are some US figures I picked up over on the Ambush Alley Black Market. 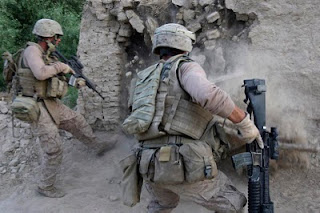 I imagine using them fairly freely as any small patrol unit of US soldiers or marines in Afghanistan, though if anyone can tell me exactly which service/year/theatre the weapons and camouflage matches I'd appreciate it 2nd Fire Team moves around corner with Squad Sergeant alongside This small force would represent a change of pace, being just a small patrol or flanking force, without any significant assets.
Alternatively they may be able to team up with some Afghan Army / Mercenaries I'll post shortly or even with the British guys you've seen previously.
Posted by Donogh at 16:32