On Saturday night I ran a follow-up scenario of Ambush Alley. This one saw a depleted Soviet force (although one with a BMP-1 and a BRDM attached) defend the Panshir village against an Afghan counterattack. 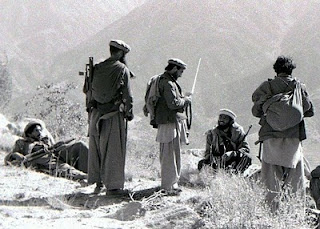 Lloyd took advantage of my liberal deployment instructions to place his entire force on the two hotspots at one end of the compound (though it may have been due to the free chair there!) Swarming techniques alarm the Soviet commander, as he realises that a fire team and sniper in the other compound will have difficulty engaging, but can't be withdrawn just in case. The BMP-1 engages the Mujahideen on the other side of the compound (where all their RPG assets are concentrated). A group of Afghans scurries across the open ground and the BMP turns its main gun on it, bringing it crashing to the ground. Only one Afghan is killed and the rest are unfazed
[Forcing me to look up the rules for heavy weapons attacks on buildings, and damage to troops inside!] A long-running firefight erupts across the rooftops, with the Afghans pouring men into the building but they are unable to force the Soviet troops out A lone ant-tank RPG gunner sets up to take on the BMP. He survives its machine gun fire and takes out the main gun! Two Mujahideen show up behind the ridge, and contemplate going over the top... The BMP retreats, having lost its machine gun to RPG fire as well. It avoids an explosive device in the market but the nearby Afghans behind the ridge can't muster up the courage to put their RPG to good use Long-range fire takes out the fire-team in the compound nearby. The sniper team has also taken casualties (all Soviet infantry casualties came from this compound, and not the hornets' nest across the way!)
No one's available to keep an eye out for the wounded BMP now, and the lone sniper must drag his spotter across the rooftops to check on his mates (helped by a medic who suddenly appears beside him) Having finished their tea downstairs, a four-man team of Spetsnaz arrive on the scene to lay waste around them, crushing the last vestiges of Afghan strength in the area A nice follow-up game, touch-and-go again until the end. The Spetsnaz were decisive, but amazingly enough the Soviets hadn't taken any casualties where they were most at risk.
Of course the vehicles didn't come too well out of it!

We also discussed doing a campaign for Steve's new Soviet platoon. I'll be lifting the great campaign structure from Ambush Valley (the Vietnam supplement) wholesale.
Though obviously I need an Afghan with a Stinger to take out the Hind Steve's ordered!
Posted by Donogh at 22:09