Got in some good Ambush Alley action at the weekend - not as much as planned, but still an enjoyable weekend with a few DVDs thrown in for good measure.

Originally I had done up a scenario to take advantage of a T-72 model, but the scale worked out to be too far out, so we came up with a quick and dirty scenario. 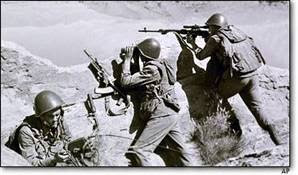 An under strength Soviet rifle platoon moves in to take control of a village in the Panshir region. An Afghan reception party awaits on the rooftop of a compound 2nd Squad moves through the fields along their right flank Sniping from the treeline, frantically trying to cover multiple angles as the MG team is heavily suppressed Accurate fire from the neighbouring compound takes a soldier down Move it! This squad will spend much of the time playing cat and mouse with a large Mujahideen group threatening their axis of attack Sergeant Boris has copped it! The Platoon's morale takes a serious hit as news comes in that a favourite NCO has been killed in action.
What's the Plan? The squad's return fire has left them short of their objective and they're not inclined to advance any further Afghans fight for second compound. Having ceded control of the outlying compound, they prepare to sell their lives dearly The Afghans fall back out of sight But their fire has had a significant effect. The MG Team is out of action again, and the sniper team rushing in to perform first aid has succumbed as well. Finally the Soviets have to pull in a fire team from the right flank to see to them Preparing for final assault. With large amounts of firepower right behind them in the first compound, this lone fire team fits bayonets! You want to live forever? They charge a small house. Hordes of Mujahideen have been pouring out of this all morning A great battle. It seemed like it was all over in turn 4 - but the Afghans fought tooth and nail to get back into it, and they could've won it in the end, had four Soviet casualty rolls gone the other way.
Posted by Donogh at 22:44