This is the scenario originally written for last weekend, until we discovered that the T-72 model was a behemoth (probably 1/48 scale). It should be fairly easy to re-fit for a different setting though.
Of course T-72s weren't really in use in Afghanistan (I don't think they made it off the airfield!) either, so we were going to use the T-62 stats.
Available as a pdf here 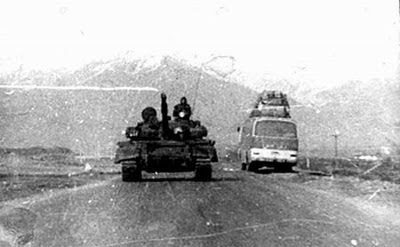 A punitive column has been sent deep into Qandahar by the Soviets. A T-62 is with them, in order to test how it can cope with the green zone.

It’s thrown a track when making a tight turn inside a village, and due to a command oversight, the T-62 was left behind. A single BMP carrying an engineer team has been sent back to get it moving again.

Repair the T-62 and get it back to the main column as soon as possible.

Destroy the tank or prevent anyone from repairing and moving it away; it will be helpless once night falls.

A small village with outlying walls. The two main buildings form a rough square while the outlying buildings are separated by open ground. Surrounding the village are several poppy fields.

To the south of the village is a wadi, overlooked by broken steep banks. A rough road crosses it at a small ford.

A small copse of trees lies to the east, and to the west lies some broken rocky ground. Deploy the Soviet T-62 at the main corner and the recovery team at the ford.

Deploy one Mujahideen group near each hotspot.

The Insurgency level is 4 for this scenario and reinforcements appear at the beginning of each turn when a 3 or less is rolled on D6.

Repairing The Beast’s tracks is going to be a difficult task.

Two successful TQ checks by the Engineers are necessary to get the tank back moving. If the Engineers get a full fire-team of soldiers to help they’ll roll a D10 instead of just a D8.

After the repair any movement at Flank Speed or over difficult terrain may throw the track again. Roll crew’s TQ at 4+ to avoid this.

[I realise that repairing a track isn’t quite so quick or straightforward in real life, but if it bothers you, just pretend it’s a different technical problem!]

The Beast is destroyed +10
The Beast’s Track is not repaired or it does not make it over the ford by nightfall +4
The BMP-1 is destroyed +5
Each Soviet soldier killed +2
Posted by Donogh at 11:50