The pre-release version of Tomorrow's War is out today. 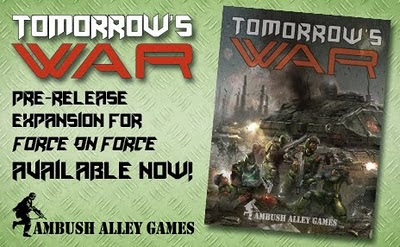 “If you want a game where you can 'buy' success with your army list, where every weapon you have works as it should all the time, every metal or plastic figure follows his orders exactly, and where the flow of the game is chess-like in its predictability, then there are quite a lot of others out there for you. But if you want a game that makes you feel like you are leading a squad of real soldiers in full NBC gear through the rubble of Beijing, or you’re up to your ass in mud and bugs in the jungles of Exlax V and you know that a Separatist Militia sniper team is out there somewhere, then you want Tomorrow’s War.”

GZG's stuff has been my North Star for science fiction gaming for years, so it really says something that he's given his imprimatur to the rules!


I nearly have my scenario (Black Mamba Down) ready for my Novaya Sakha Rebellion background, so I should get that out over the next couple of days once I've given the final version of the rules another once-over.

I'm heading down to Galway this weekend for some BattleTech and possibly Inquisitor action, so you'll probably be seeing a lot of action here next week.

Also, the casualty figures poll is closing tomorrow (on the top-right of the blog) if you still haven't registered your take on the issue. Thanks!
Posted by Donogh at 13:02