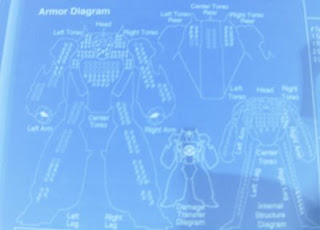 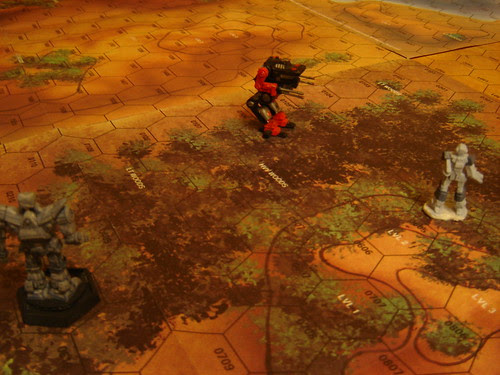 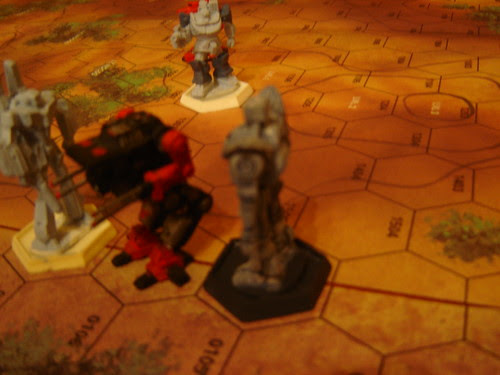 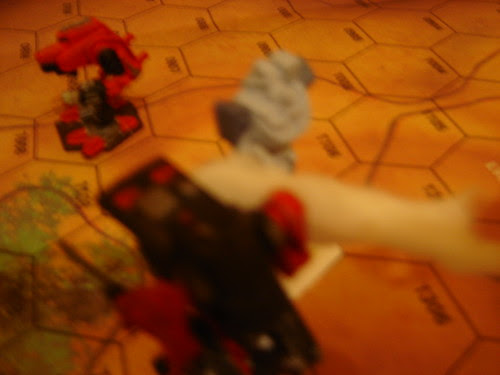 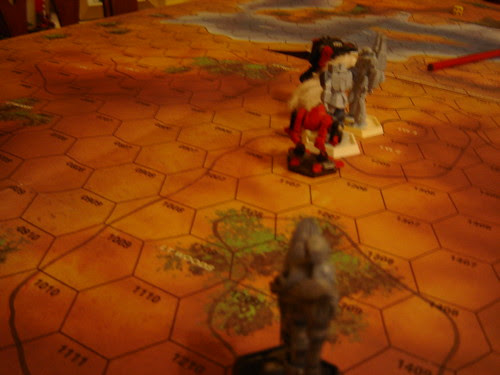 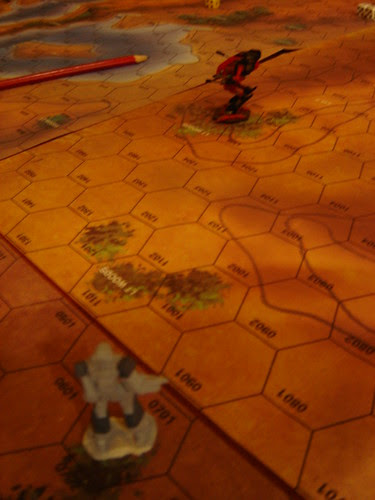 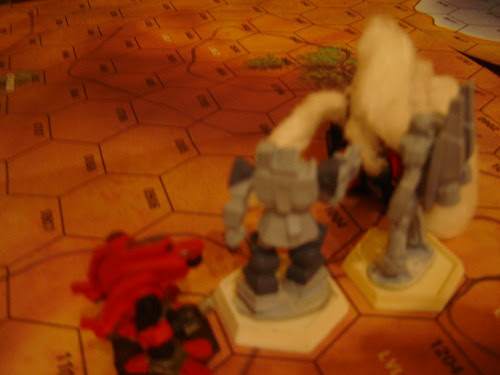 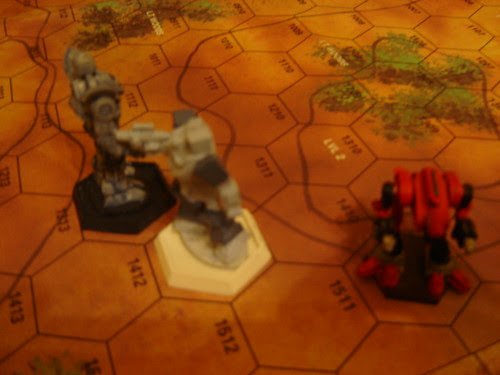 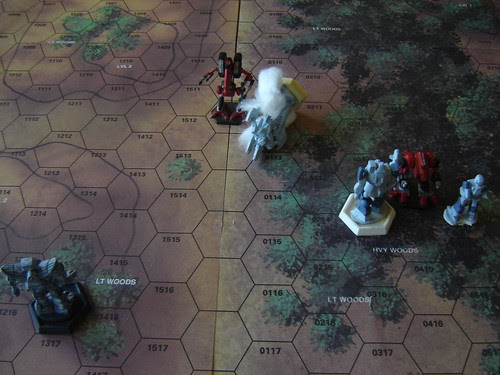 Mad Dog forces retreating Mercs to leave crippled Phoenix Hawk behind as day breaks
Posted by Donogh at 13:00 No comments:

Clan Ghost Bear's First Wave attacks went smoothly and well ahead of schedule. The Second Wave was to be more challenging. Because of the failure of the Clans to adequately garrison conquered planets, uprisings and guerilla attacks occured, and these were almost lethal to Ghost Bear's supply lines and timetable. The dishonourable actions of mercenary companies raised the ire of warriors throughout the Clan, nowhere more than in the 14th Battle Cluster.

The 21st KungsArme retreat from the 96th's landing zone and set up a defensive position near Silver Lake, but close enough that their counter-attack will threaten the retreat and survival of the attacking force.
The Regiment comprises almost thirty armoured fighting vehicles.
The 96th plan to frontally assault their position, and Charlie Battle Star will pin the strong supporting elements on the flank nearest Silver Lake and prevent them from flanking the attack.

Chen in his Mad Dog (Prime) (Innersphere Codename: Vulture) and Petra in her Viper (Config A) (Inner Sphere Codename: Dragonfly) will hit this unit's flank while the rest of the star cut off any cooperation between these and the main FRR force. 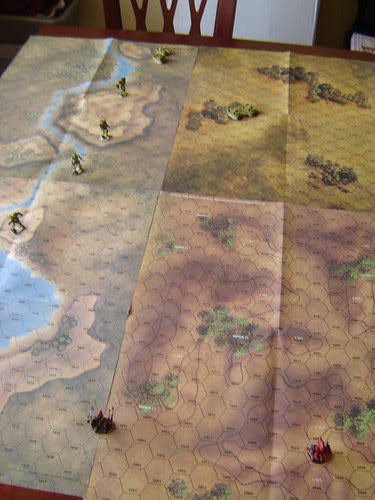 FRR unit hit in the Flank

Although both sides are somewhat aware of their enemy's abilities, this is mostly hearsay and conjecture (those are kinds of evidence, right?). As the battle develops early on, lack of experience shines through. As the Mad Dog races to the dominating hill on the battlefield to engage the Enforcer (ENF-4)facing, the pilot leaves his right flank completely open to the rest of the Rasalhague lance. 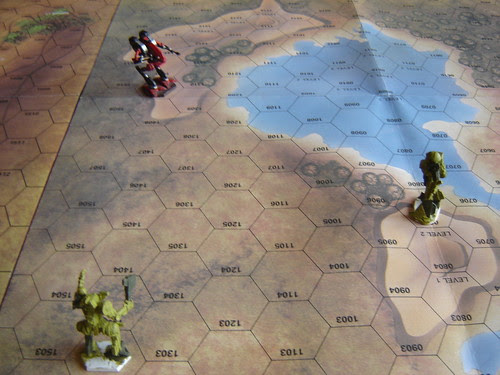 As initial fire is exchanged between the sides, the Viper surprises the Hatchetman (HCT-3F) by revealing its extreme jump capability. If previously the Rasalhague mechwarriors had been impressed with it manoeuvrability they were to be even more impressed with its firepower. Mounting 5 ER Medium Lasers (each almost the equivalent to a standard Inner Sphere Large Laser) it had the ability to cut one of the Rasalhague 'mechs to ribbons in seconds. 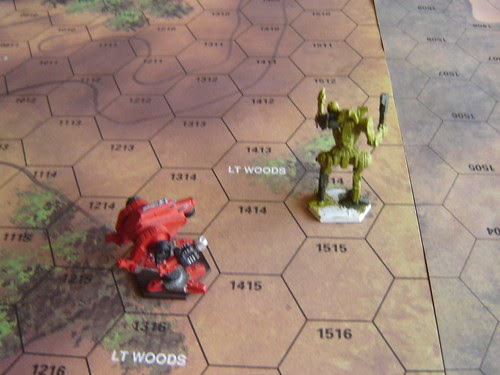 The Hatcheman is aggressive in its defence and pushes the Viper backwards, taking a swipe with its hatchet. Meanwhile the rest of the lance closes in on the Mad Dog whose room for manoeuvre has been cut down immensely by its slipping in the shallow waters along the lakeshore. 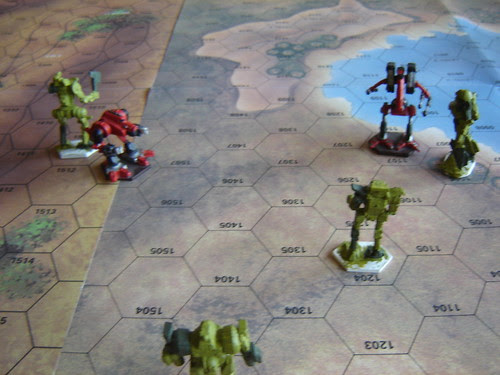 While Viper is occupied, remainder of FRR unit closes in on Mad Dog

With a lance of vehicles approaching (a cursory examination identifies them as Patton Heavy Tanks) the two Clan 'mechs are in danger of being overwhelmed, and the Viper swoops into the mix to draw off some of the heat, giving the Mad Dog the opportunity to concentrate its firepower.
It has now become evident that these Inner Sphere forces have no respect for the hallowed traditions of the Clans, and their Rules of Engagement are purely pragmatic. 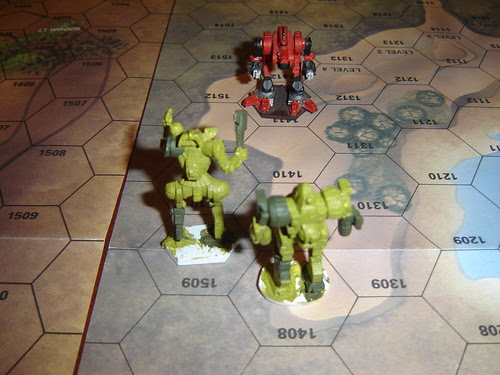 Viper draws off some of the heat

The Mad Dog cycles through its weapons, dealing with some heat problems, and is taking some damage to its internal systems already. However Chen decides to push his opponents to the limit by remaining where he is and applying as much firepower as possible to the Enforcer before switching to the Wolfhound (WLF-2) which has shown itself to be a dangerous opponent. 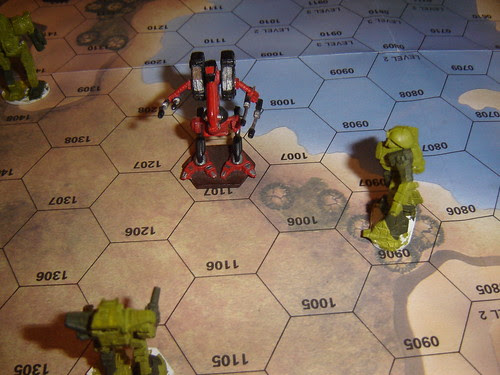 Mad Dog is confidant in his superior firepower

The Enforcer survives, but only just, and jumps away over the hill to break contact.
As the area opens up the Mad Dog attempts to shake off its opponent and open the range to something more advantageous, but it is too late. 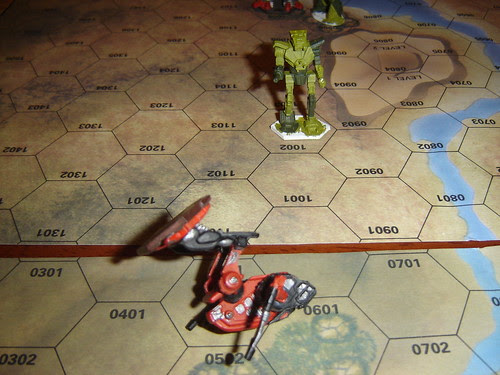 Brilliantly concentrated fire on its right flank drills through to the engine and knocks out the Mad Dog. Now, the Viper is alone on the battlefield. Although communications from the rest of the cluster indicate the they have hit the main Rasalhague lines and the heavy tanks have been withdrawn. 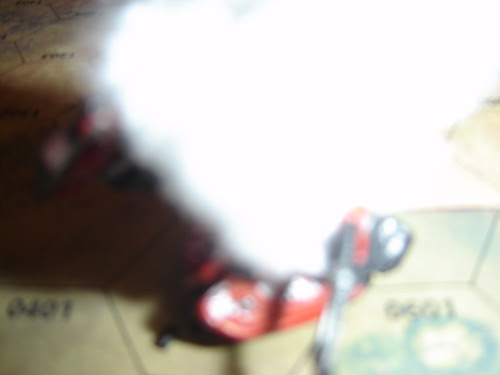 The Viper extracts a heavy price against the limping Hatchetman, and brings that 'mech crashing to ground on top of the hill.
Using it's superior manoeuvrability, the Viper attemps to harass the Enforcer as it jumps from the field of battle, leaving the Blackjack out of the action. 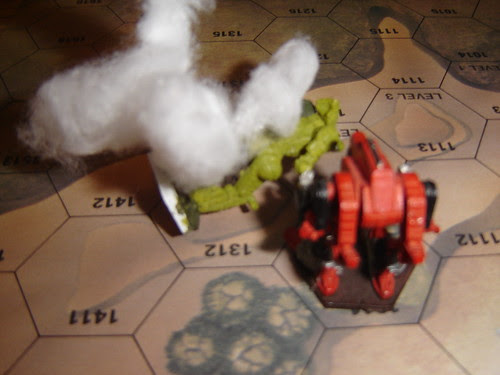 The Wolfhound covers this retreat, almost bringing the Viper to grief with a one-in-a-million shot. The Viper decides not to press too hard, as it too begins to feel the battle damage. The Blackjack (BJ-1DB) follows across the river, and together the two 'mechs shepherd themselves off the field, mindful of the Viper's long-range abilities. 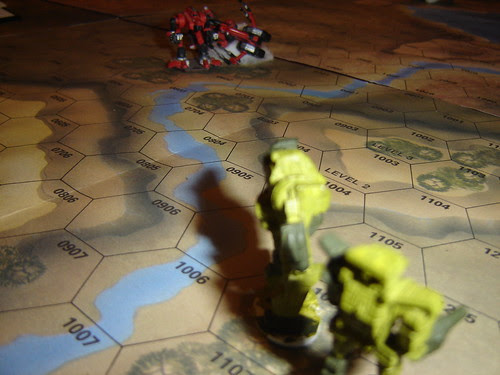 Blackjack makes it across river

Aftermath
The rest of the Cluster overwhelms the defending Rasalhague regiment, but no sign of the mercenary company is to be found in the vicinity.
Bravo Battle Star is sent out to investigate...