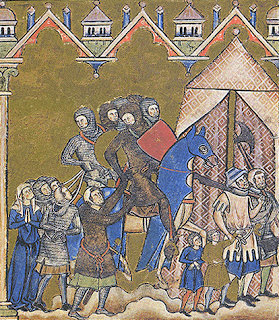 King Friedrich of Ruritania, a hotblooded and foolish youth, went on crusade without securing his line. He died in battle, along with his army and most of the nobles of the Kingdom, at Nicopolis.
His infant son, a weak and sickly boy, died four year later leaving the realm bereft of a rightful heir.

Two candidates have come to the fore during the interregnum.

Johannes, Bastard of Bohemia. Claimant on the throne of Ruritania by no real right, but put forward by Wenzeslas, King of Bohemia.

Alexios Doukas, Byzantine Knight in Exile. Claimant on the throne of Ruritania by the fact that he is married to the dead King Friedrich's sister.

Nobles war amongst themselves, both to gain land and power in the chaos, but also to push their preferred candidate forward.

Francesco Savorgnan, younger brother of the ruler of the Italian city of Udine, here with a trusted hunter.

Massimo de Montacada, an Italian German man-at-arms in the service of Francesco Savorgnan of Udine. Here with his four heavily armed sergeant and archer.

Ulric Meinhard, a nobleman from the powerful nearby city of Görz. Seen here mounted and with his squire attending and the infamous saracen archer Yusuf Edrisi.

Baldric von Lienz, a German man-at-arms in the service of Ulric Meinhard of Görz. Here with two sergeants and a crossbowman.

William Wittelsbach, a nobleman connected with the ruling dynasty of Bavaria. Seen here mounted and with his squire attending.

Leopold von Neuhaus, a German man-at-arms in the service of William Wittelsbach. Here with a sergeant and an archer.

The ambitious Brabanzon mercenary captain Geoffrey of Brabant has also taken an interest in the war. Here he is with attending sergeant. Under his command are three separate mercenary lances, each with a man-at-arms, mounted sergeant and crossbowman.

Jean de Leuven, a mercenary in service with Geoffrey of Brabant

Johannes de Baesweiler, a mercenary in service with Geoffrey of Brabant

Markus de Namur, a mercenary in service with Geoffrey of Brabant

Surely God will be merciful upon the unfortunate people of Ruritania and make the interegnum a short lesson of humility and wisdom...
Posted by Donogh at 13:51 No comments: 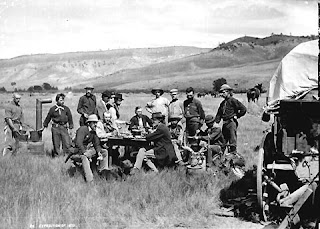 The Pinkertons have gotten wind that the townsfolk have sent to the county sheriff to intervene against them. Creeping out to the Evans Ranch through the badlands the Pinkertons arrive to find Ol' Jeb with Evans across the stream with the Peterson brothers and Farrell at the Evans house.

Ol' Jeb can see the Pinkertons approach but he won't waste his shotgun ammunition at this range.

Zeke White has climbed up a rock cliff overlooking the ranch walls to get a better shot, but is shot by Farrell from the front door of the Evans place. He stumbled and falls off, twisting his knee in the process.

The Peterson brothers skirt the McEwan house, hoping to outflank the Pinkertons' advance.

Evans and Ol' Jeb reach the road having considered trying to cross the ford but taking shots nonetheless.

Rucker charges ahead of his crewe. For some reason he's advanced with no regard for cover, while his men run from rock to rock.

Evans and Ol' Jeb head for the bridge, picking up speed on the good surface and somehow aren't hit by the volley of fire coming from Pete Walsh beyond.

Jake Peterson and Farrell wait for Rucker to appear around the copse of trees. When he does, he's surely done for...

They open fire on Rucker over the wall, but miss due to Rucker's canny use of cover.

McFarland has caught up at this stage and has slinked up along the tress. He takes aim at Peterson and shoots him dead.

With Peterson's brother in the McEwan house, and Ol' Jeb and Evans at the bridge, the Pinkertons has taken control of the Evans Ranch and the others surrender. The Pinkertons have mastered the town's most important people. Will the County Sheriff save them?
Posted by Donogh at 18:08 1 comment: 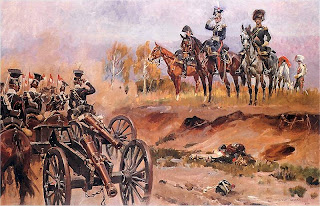 Off on holidays to Connemara (hoping to catch some of that cruel back-to-school weather) for the next two weeks.
Our first real family holiday so here's to Isabel really enjoying her time on the beach. With that there's going to be previous little activity here for a while. Indeed there'll be no gaming to be had either, but I am bringing down a few figures to paint up in the evenings.
They're 12 or so 20mm figures from Britannia's Vietnam range. A little project for my first group build over on the Guild. It's the first time I've painted 20mm, and the first time in years I've painted anything that wasn't 6mm (or a spaceship). So wish me luck!

I shall also be doing some work on my scenario for 4th Kawanakajima soon as part of my continuing Sengoku Jidai obsession.

The poll on projects just closed early today, some interesting results (should appear to the left of this post on the blog page), but nothing like the clear-cut outcome it seemed like a week ago. Two people out there agree whole-heartedly with my project list from this post
Thanks for all your votes.

The projects which were higher up on my list tended to get the most votes anyway! With Gladiators being the notable exception.
I'll have to do the North African Desert in WWII (4 votes) immediately after my Medieval Skirmish (4 votes) and Napoleonics (4 votes).
Both the British Civil Wars and Present-Day Afghanistan got some support (2 votes each) and I'll have to obey the wishes of the masses and promote these to longer-term projects alongside or even ahead of Gladiators (1 vote). I was surprised the Afghan option wasn't taken by the Ambush Alley readers out there...

Some teaser photos from the top of the poll

Austrian Column on the March in 1809