A Black Hawk has crashed in the vicinity of Ba’ath party administrative buildings. A rescue mission has been sent in all-guns blazing but the remaining Iraqi Army units in the town see this as their chance to make their mark. 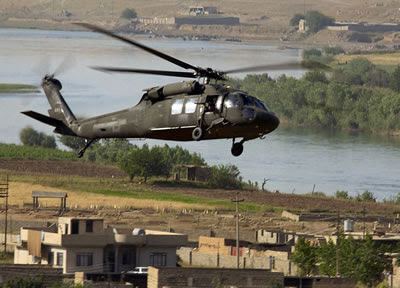 The road to the crash site is long and hard, and the planning routine for both sides at the beginning was interesting. The US players concentrated their discussion on the best lines of strafing for the on-call Cobra. The Iraqi players contended that they should shoot it down, but primarily decided to concentrate everything on overrunning the crash site - while hunkering down to allow the rescue column to pass through the initial defences 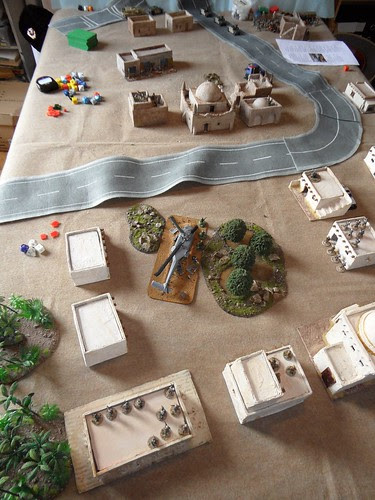 As the survivors take cover at the crash site, the sniper team are patched in to the Cobra gunship - it zooms in but the light air defence knocks it out of the sky and all future air missions are put on hold. An air of disbelief gathers over the US players, but they get back down to business sharpish 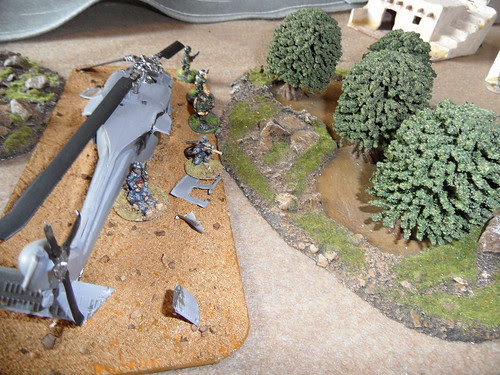 The leading Humvees go off-road and overwhelm the first Iraqi squad behind the market - they take a lot of hits, sounds like the Iraqis are concentrating fire on the rooftop .50cals 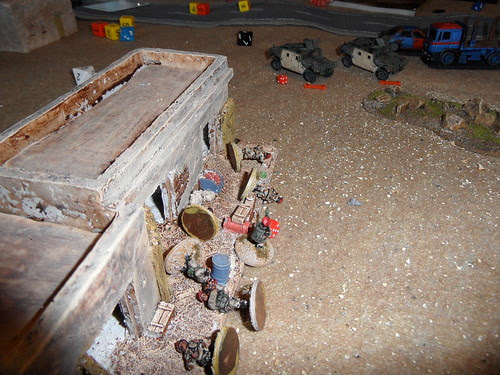 An intense firefight erupts in the square - the sniper team pick off most of the Iraqi HQ, and even the helicopter crew (led by the unwounded crew chief manning the M60) account for a lot of the rooftop Iraqis before taking too much fire 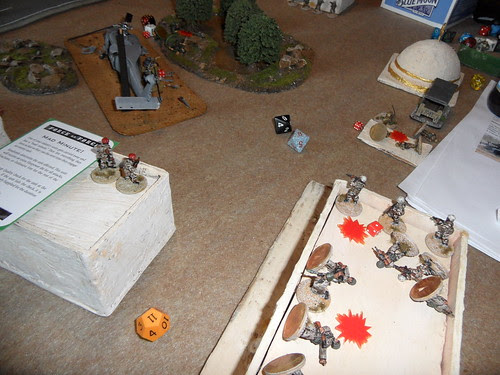 The third Humvee joins the rush across the marketplace, but while knocking out Iraqi resistance there takes some serious damage to its transmission. It rolls forward to park in an alleyway ahead. The fireteam dismounts from now on 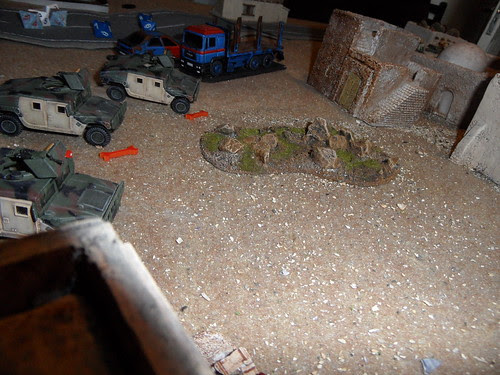 On the other flank, the Abrahms has been forced to take a detour around a suspicious object but when it rejoins the fray the HQ Hummer takes a hit, stalling it. The platoon LT and is hit bailing out and the Sergeant has to take on water. Everyone on this side of the battlefield begins to take fire from the rear as one of the Iraqi units bypassed takes to the rooftops and opens up.
The Abrahms is unable to fire its main gun as the barrel is right over the Humvee's bailed-out crew 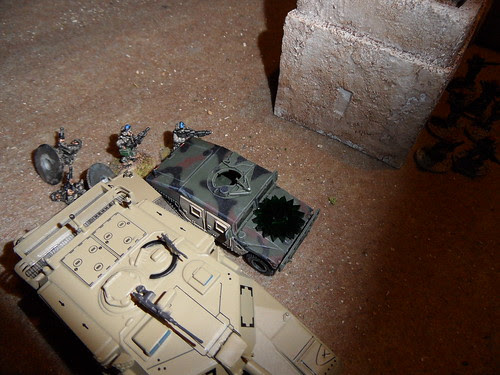 The Sagger team lying in wait at the main entrance to the square is surprised by the sudden appearance of one of the Humvees, but it can't get a bead on the fast-moving vehicle before the machine gun suppresses their location and drives through 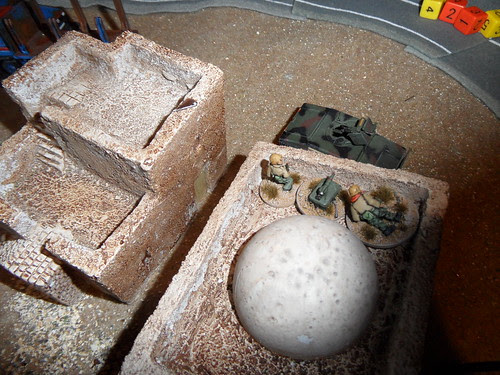 Meanwhile, at the crash site, the sniper team have moved to the other side of the helicopter to secure that approach against an Iraqi machine gun team and another rifle squad, but when they do that, two small Iraqi groups move in to surround the aircrew - even the Iraqi commanders are getting their hands dirty 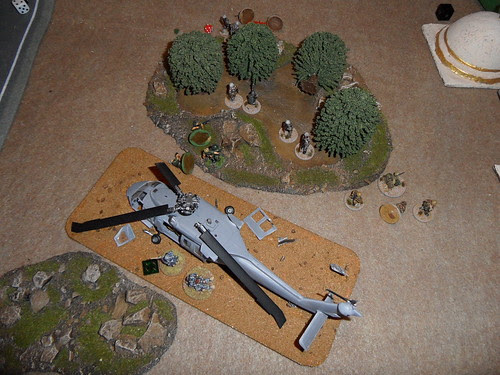 Unleased, the Abrahms shows its ass-kicking powers at full stretch. The nearby Iraqi team which had caused the dismounts from a Humvee some trouble gets some grief of their own. The Marine machine-gun team from the HQ Humvee advances alongside 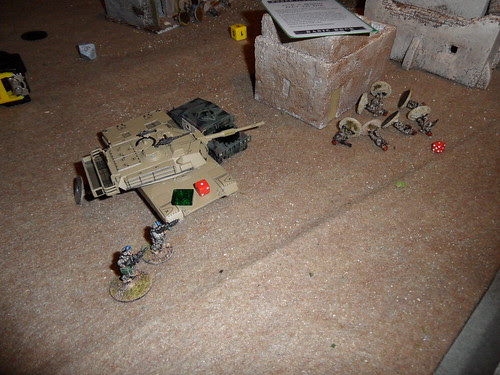 The first Humvee arrives on the scene, wiping out the Iraqi squad which overran the aircrew - a quick headcount shows that everyone's still there 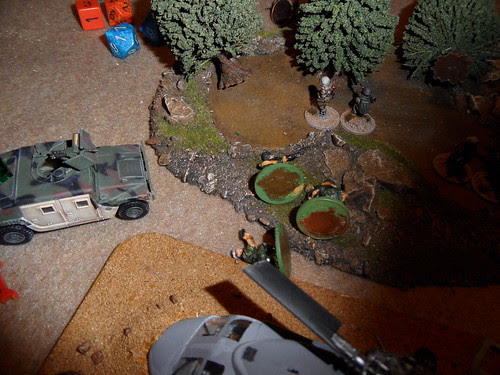 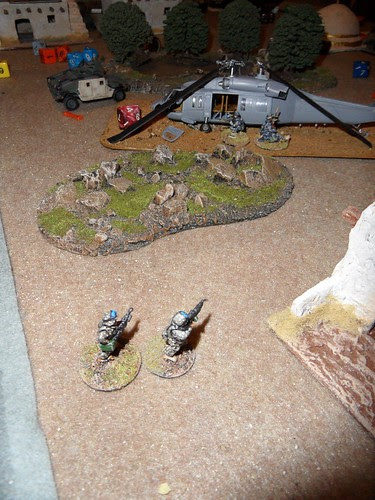 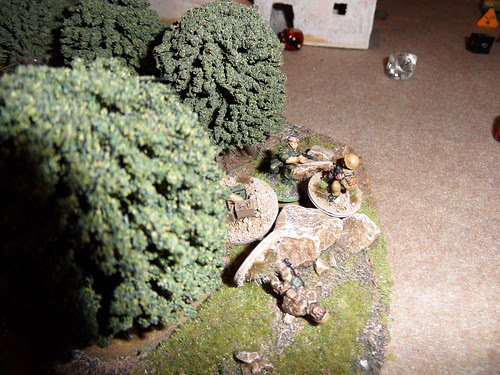 The sniper team rushes to the rescue, taking careful aim at the Iraqi holding their comrade - though exhausted and running low on ammunition, the sniper makes no mistake 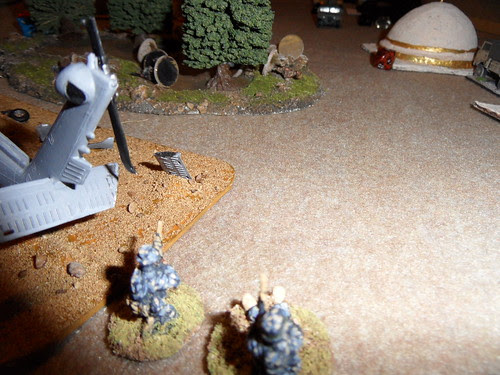 A close-run victory for the US, coming out of an honours-even 2-2 run-up earlier in the day!

As per my recent convention formula, I'm using the same map in the last scenario as in the penultimate one - this time of course, because I ran two sets of missions simulaneously the 3rd and 4th scenario's setups fitted together for the 5th. 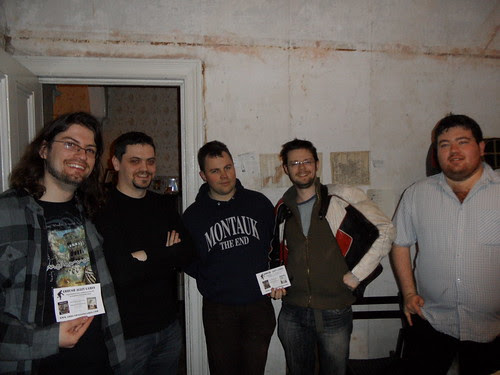 All five players left standing at the end of the night - prizes were awarded for 'Most Daringly Optimistic Manoeuvre' and 'Acts Above and Beyond All Likelihood'
Posted by Donogh at 22:51