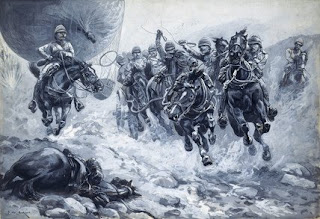 Abraham Simpson, DSO (Commander, RN) sent two parralel columns upriver towards the last known location of Dr. Gaspard de Chateaubriant. These columns, under Doherty and Nash were tasked to set up camp beyond the valleys.
There had been some signs that everything was not completely normal, and they had spotted giant lizards in the distance, the sort naturalists had convinced the world had been long extinct.

Nevertheless, when Doherty saw a pair of large armoured lizards ahead of his column, he took it upon himself to ride ahead to take a closer look. His pistol had no effect on its armoured hide, and he waited for his men to catch up. 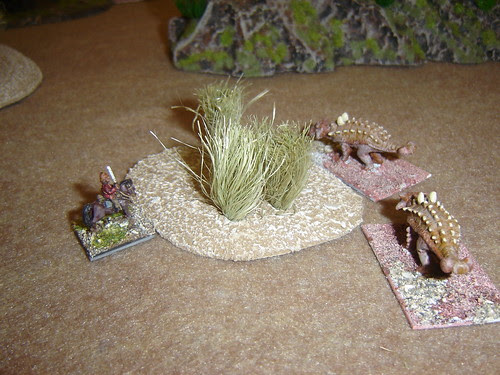 Advancing past a large forested area Nash spooks two large bipedal lizards which he identifies as Iguanadons and therefore no threat whatsoever. Nash's activity attracts the attention of a far more dangerous creature, the Tyrannosaur. 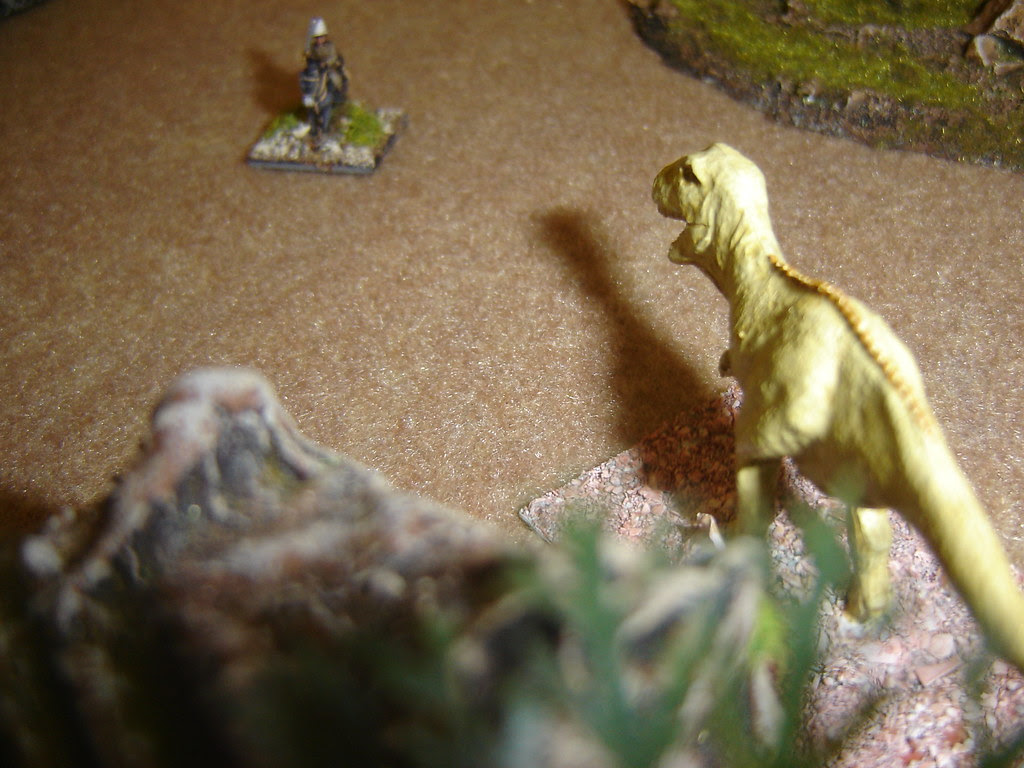 The first Iguanadon runs into some high grass nearby and takes cover from both the Tyrannosaur and Nash's column. 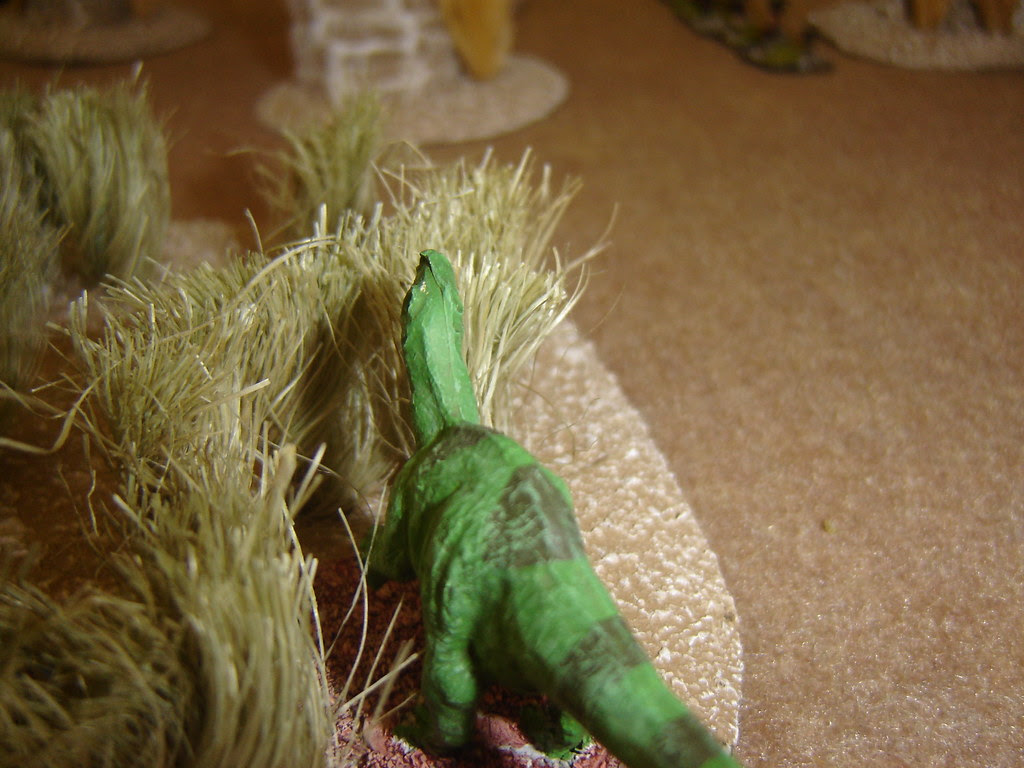 Meanwhile Doherty's column advances through high grass, attempting to stay out of sight, and hoping that Doherty removes himself from danger quickly. 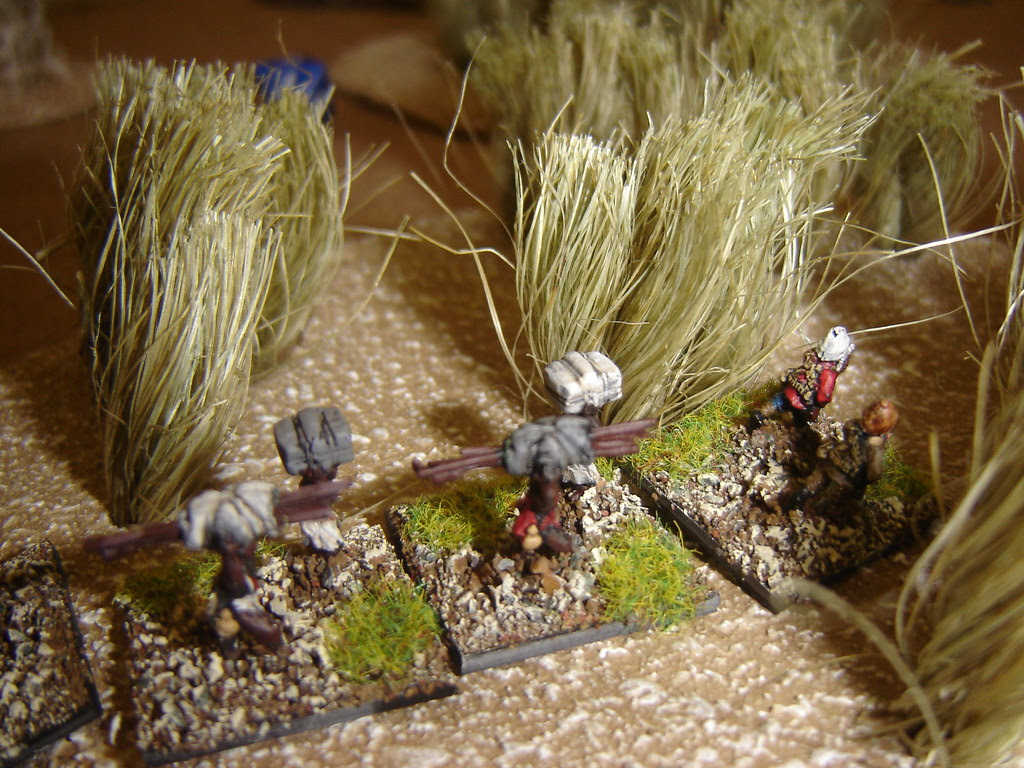 For Doherty has more than the armoured quadrapeds to worry about. Another Tyrannosaur has been hunting them, and has taken an interest in Doherty instead. 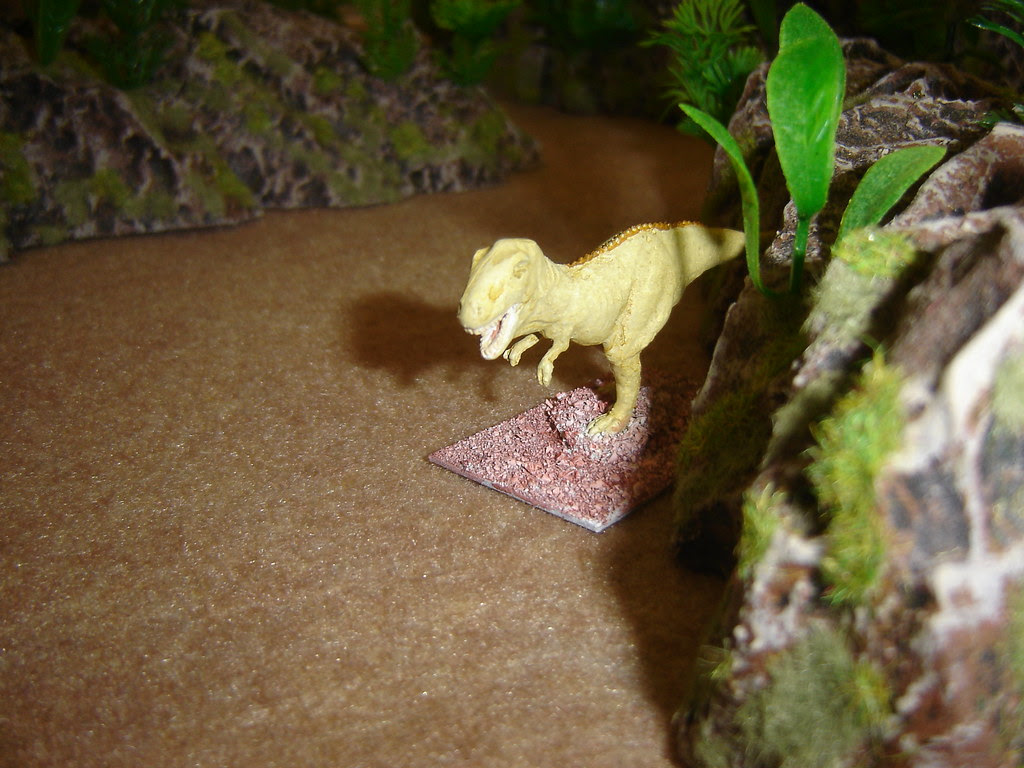 Taking his cue from the second Iguanadon Nash rides into the forest to avoid the Tyrannosaur. To no avail! Skillfully avoiding the attack of the terrible Tyrannosaur on his horse, Nash hides in the bushes keeping his horse calm despite the close attentions of the giant predator. 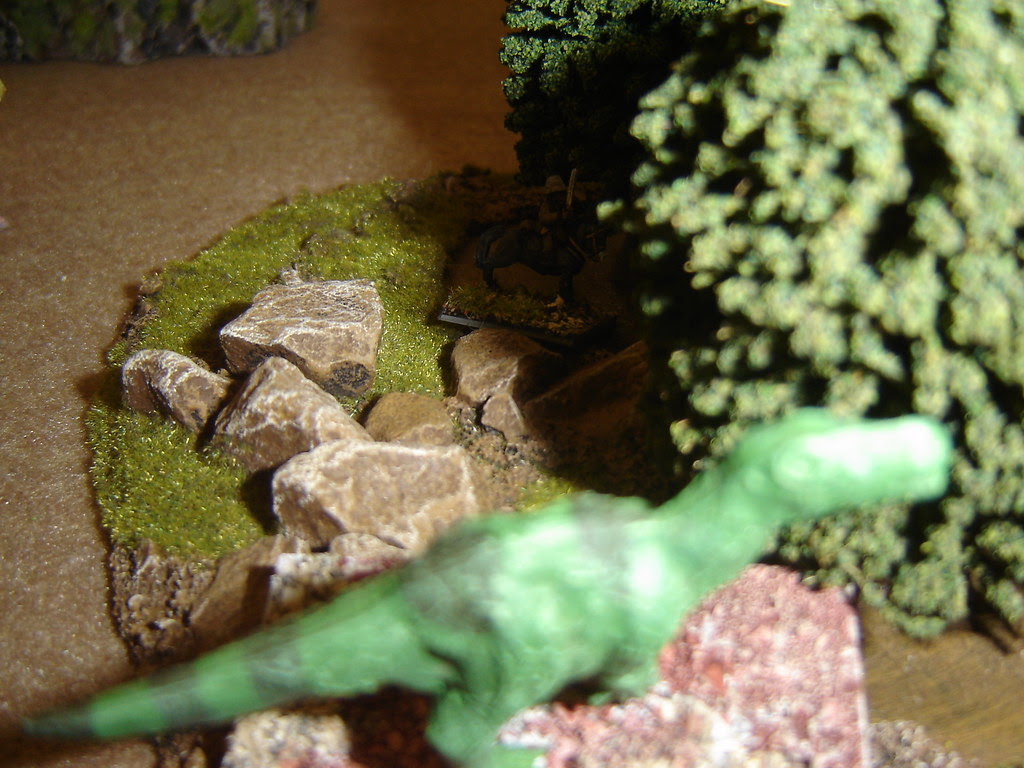 Doherty is stuck in a similar quandry but is unable to flee, and his heavy revolver has little effect on the beast. 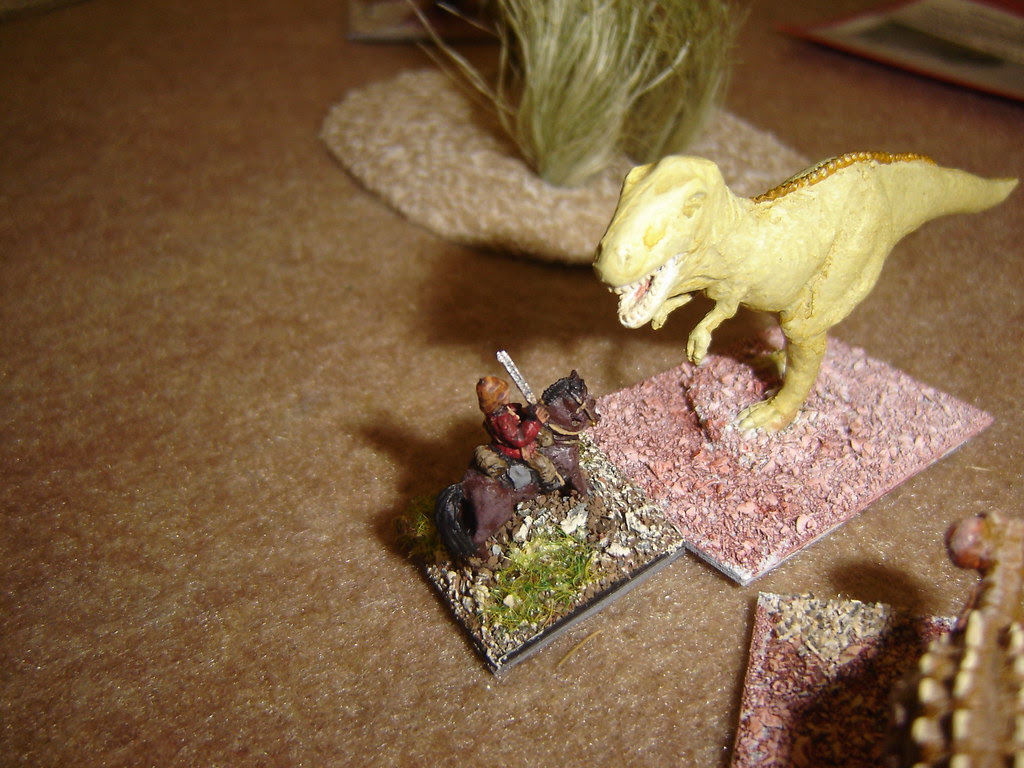 Doherty is plucked out of the saddle by the Tyrannosaur, his upper body landing in front of his column which scatters at this grisly sight. 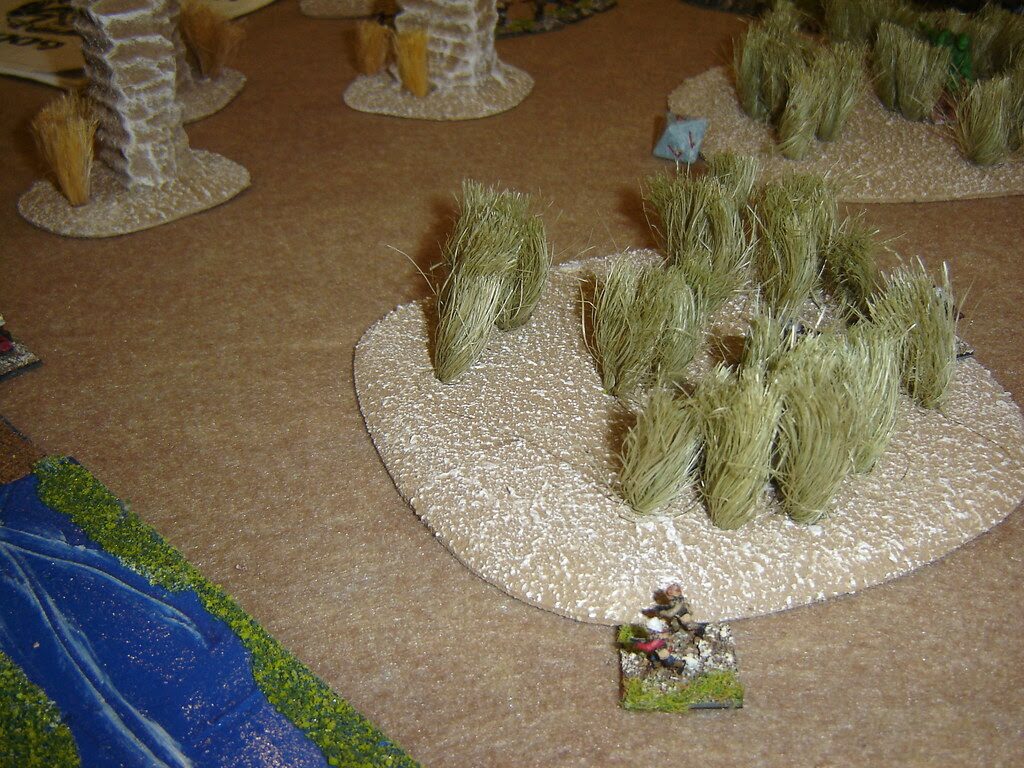 Recovering, they take up position to fire at the Tyrannosaur driving it away, at least temporarily. 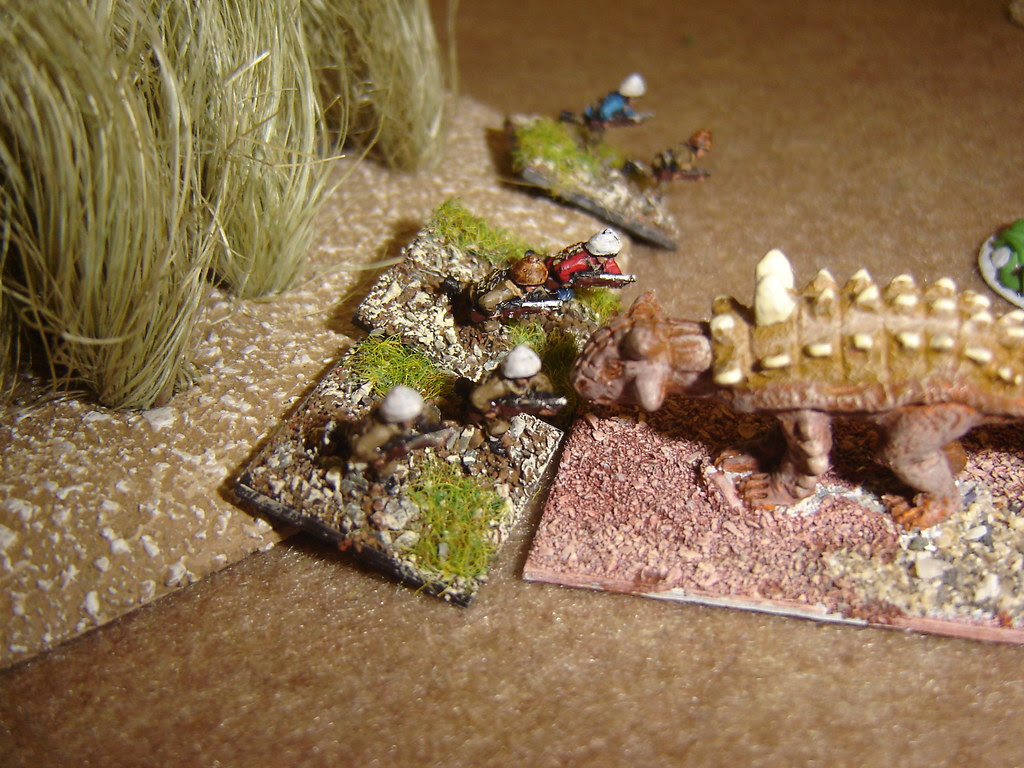 Meanwhile the other British column marches on through the forest, avoiding the Tyrannosaur which has gone after the Iguanadon. 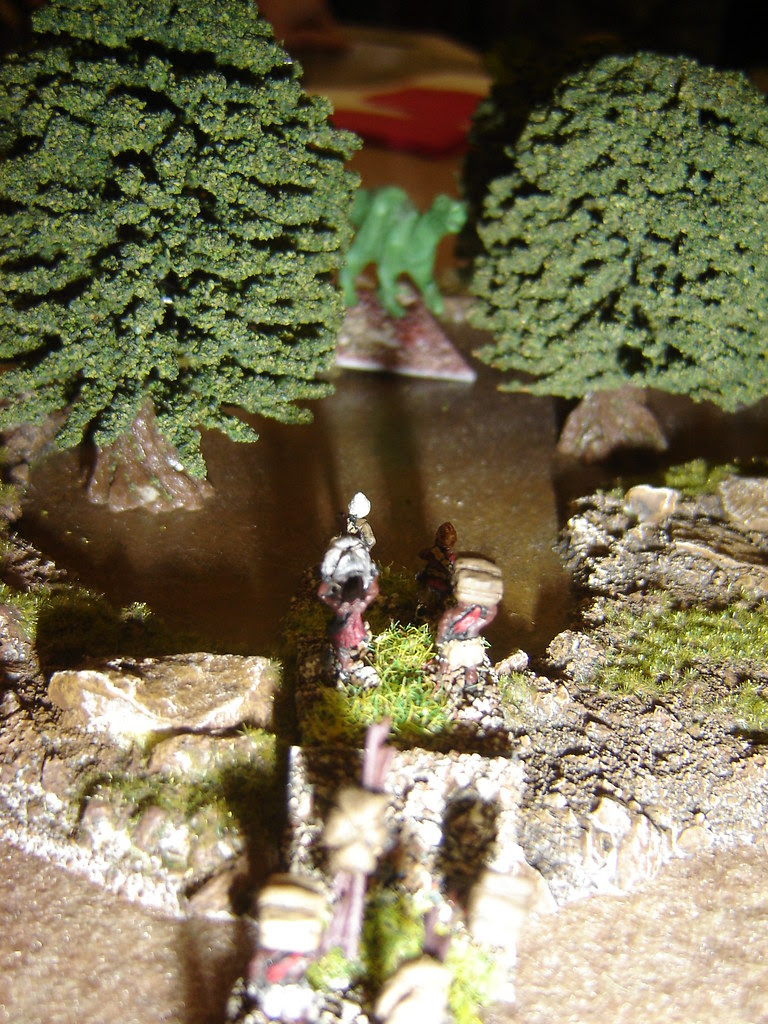 The Iguanadon have evaded their predator, making their way past the scattered native porters and across the ford to safety. 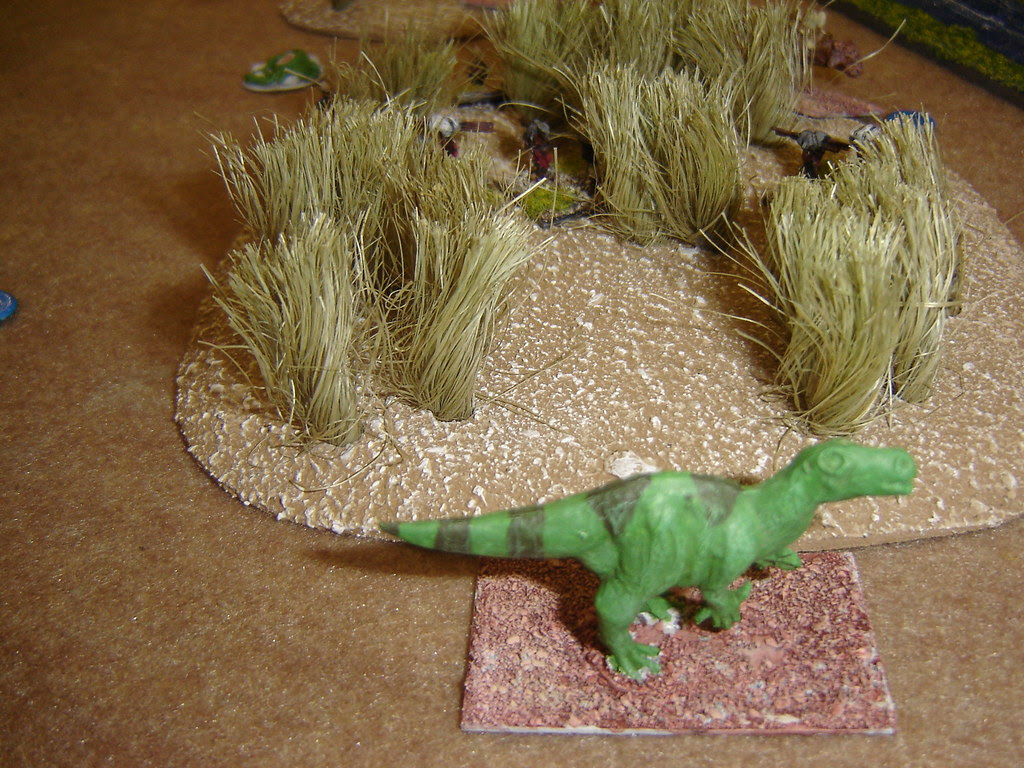 Several dozen miles away the first group of American adventurers have been led by H. Jack Vanderbolt to meet up with their vehicles and supplies which are being disembarked from river boat.
They must make their way through badlands and ravines to cross at a safe ford, as they have a field gun in their possession. 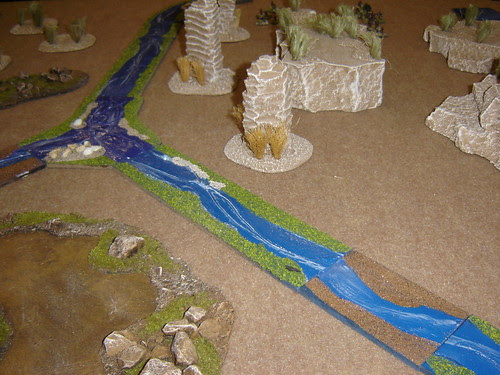 Danger lurks! A Spinosaurus has been preparing to attack other dinosaur who are making their way to a nearby lake, but it spots the adventurers. 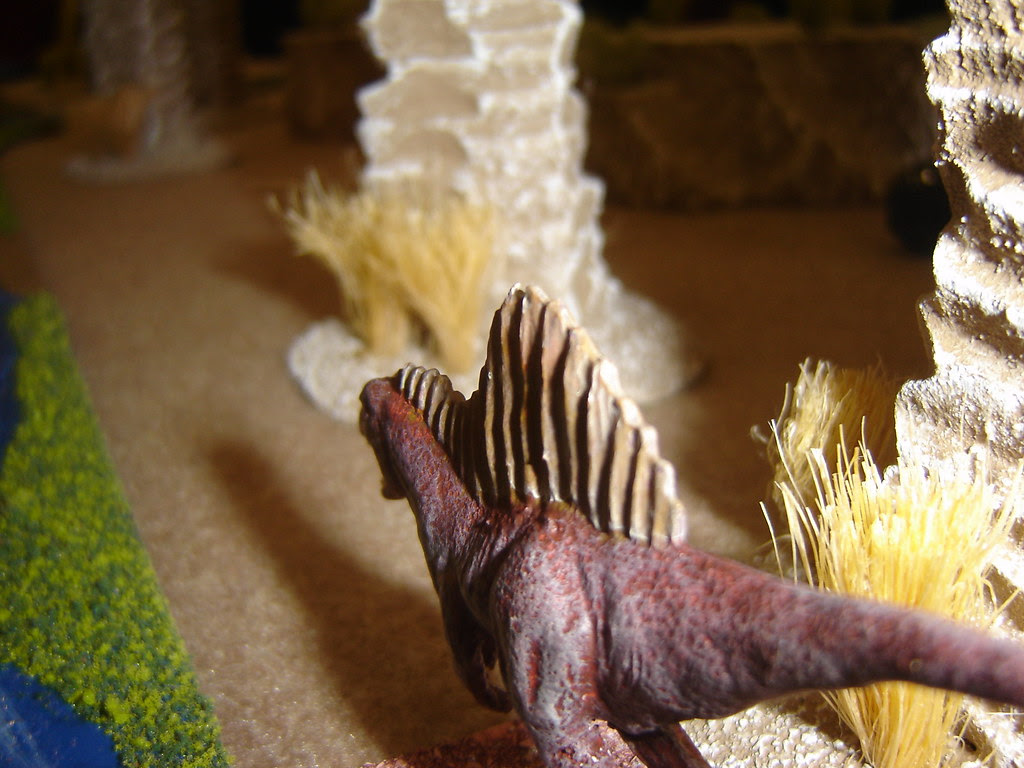 Seeing this gigantic beast approach, the Americans manhandle their field gun up to one of the heights overlooking the river ford and indeed the ravine they are about to move into. But can it get into position before the dinosaur charges? 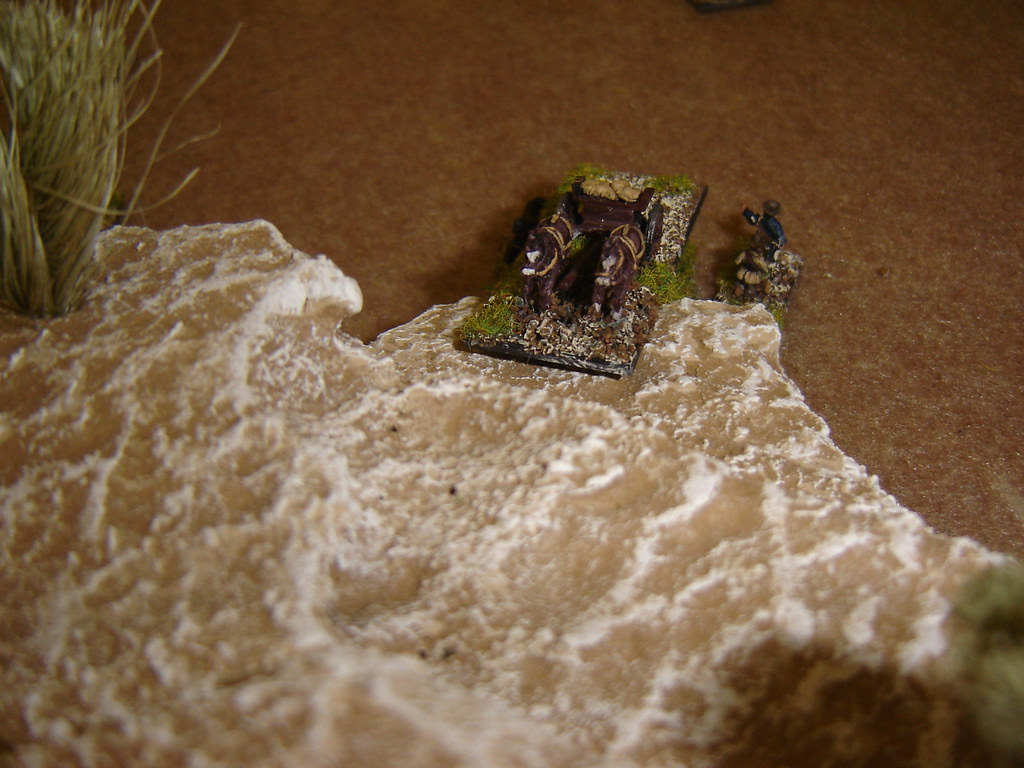 It charges indeed, but as it lunges towards the Americans on foot they scamper out of the way (most skillful and fortuitous!) 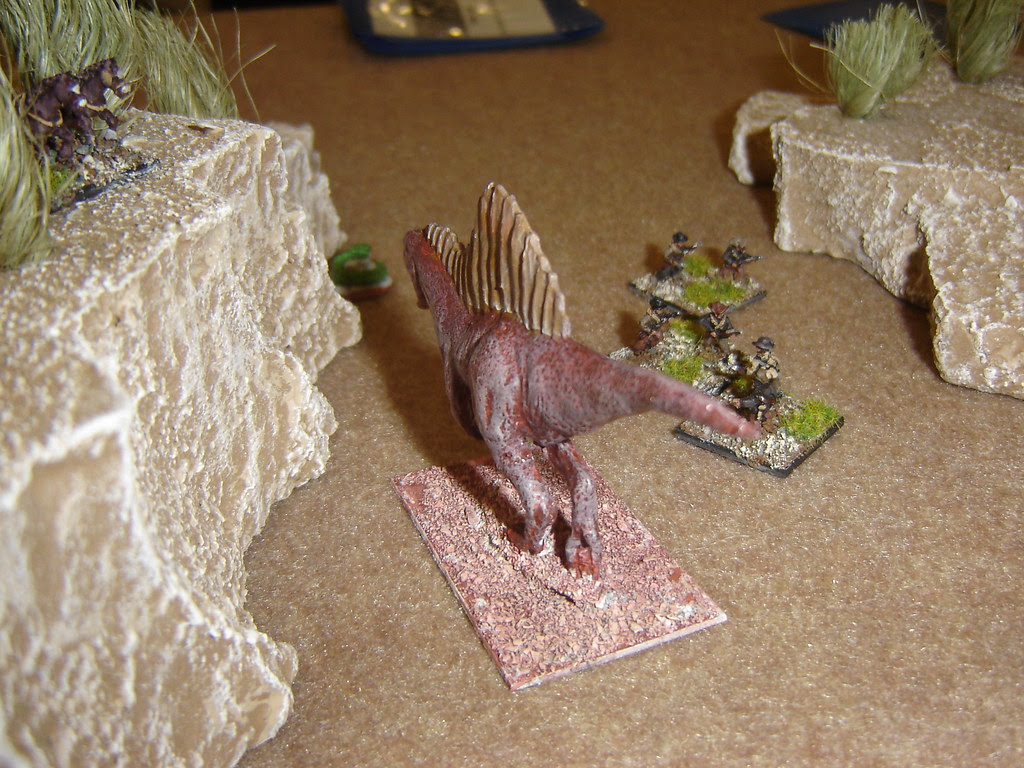 Concerted fire from all sides sees the Spinosaurus fall, dreadfully wounded to the ground, the coup-de-grace being administered by Vanderbolt with his shotgun. 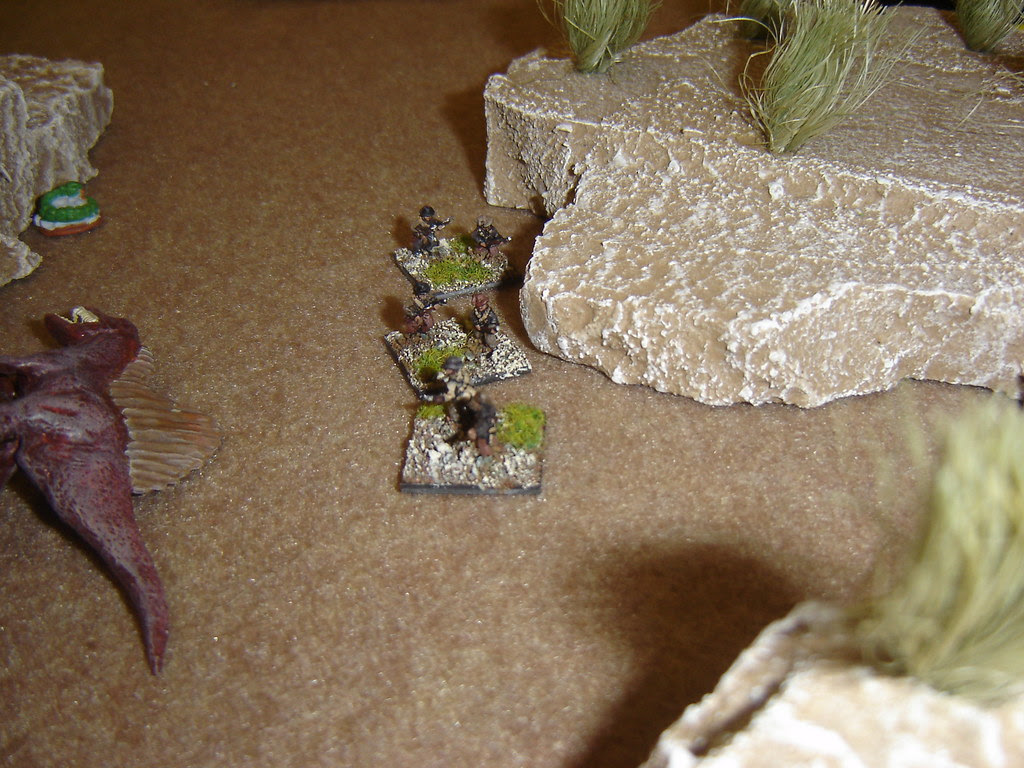 The armoured beasts, oblivious to either danger nearby continue to the watering hole. They are obscured by the large rocks on the shore of the watering hole and Vanderbolt send Rosenfeld across the river to get a better line of sight on them while he and Hannigan cover the ford. 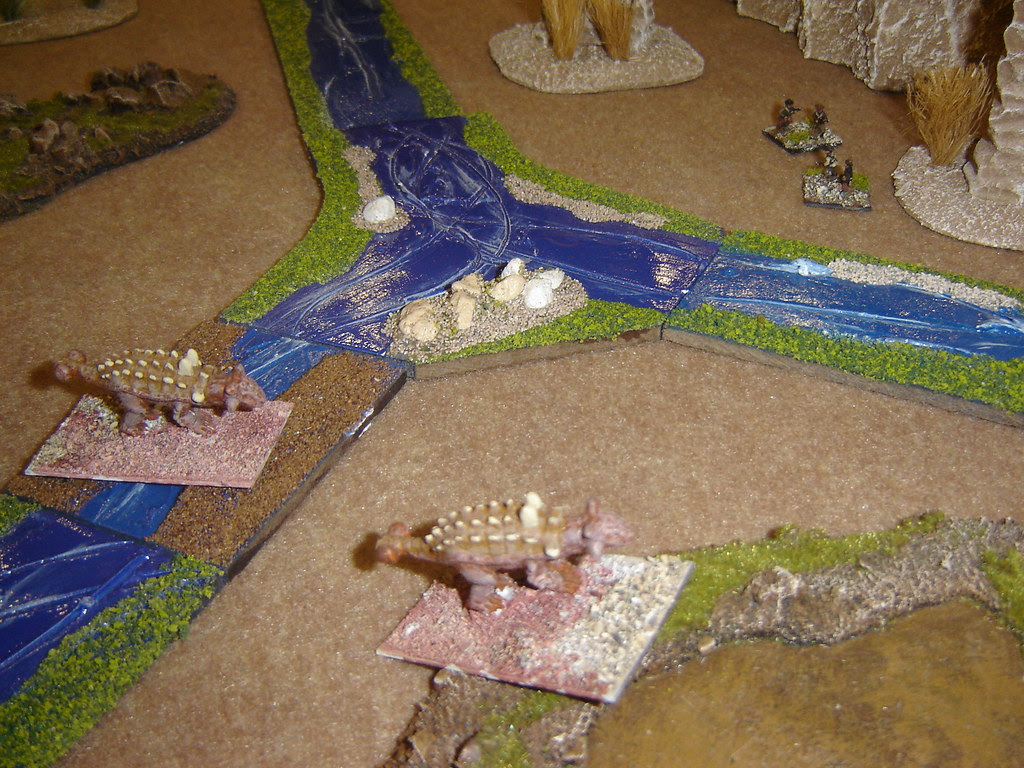 Rosenfeld find himself in trouble immediately, barely avoiding the fatal sweep of the dinosaur's mace-like tail. 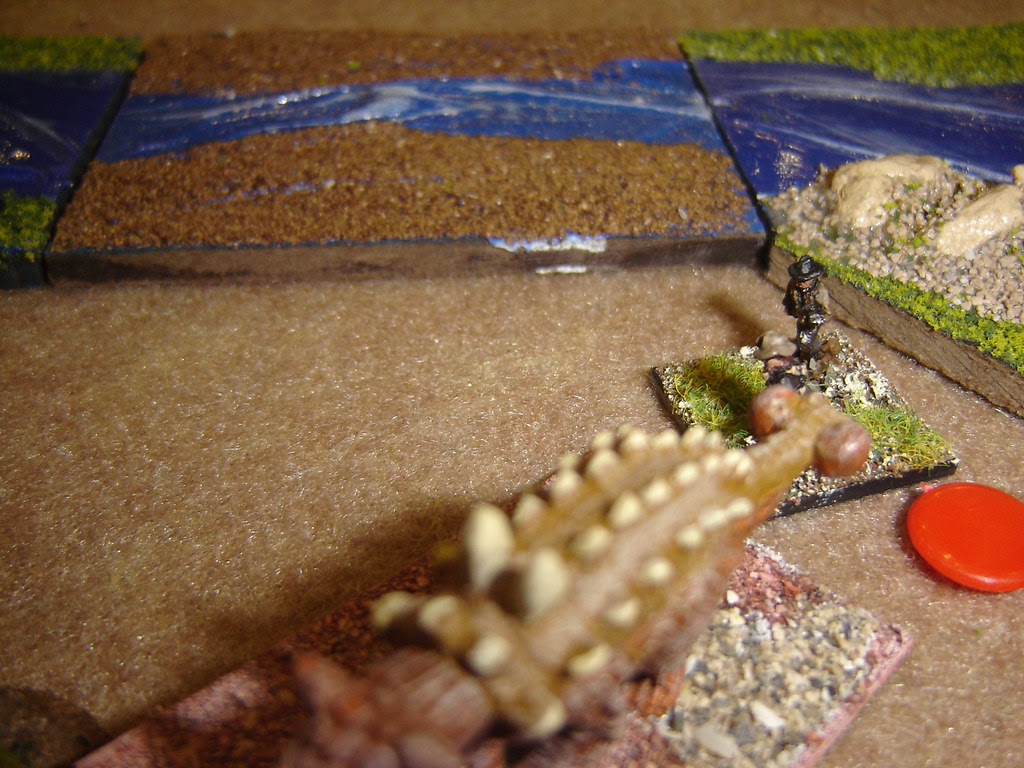 As the Edmonton flees back to its pasture, Rosenfeld shoots it in the spine and it thrashes around, only yards from safety. 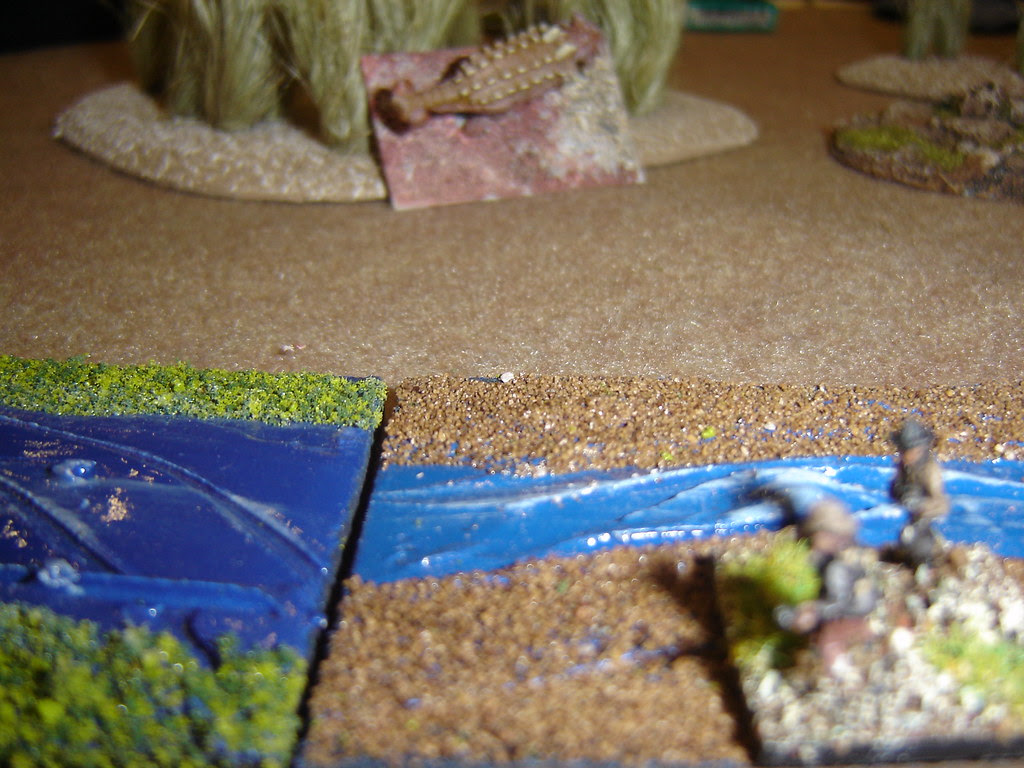 At the fork in the river. Vanderbolt discovered the long-dead carcass of an unknown creature, within which are human remains. 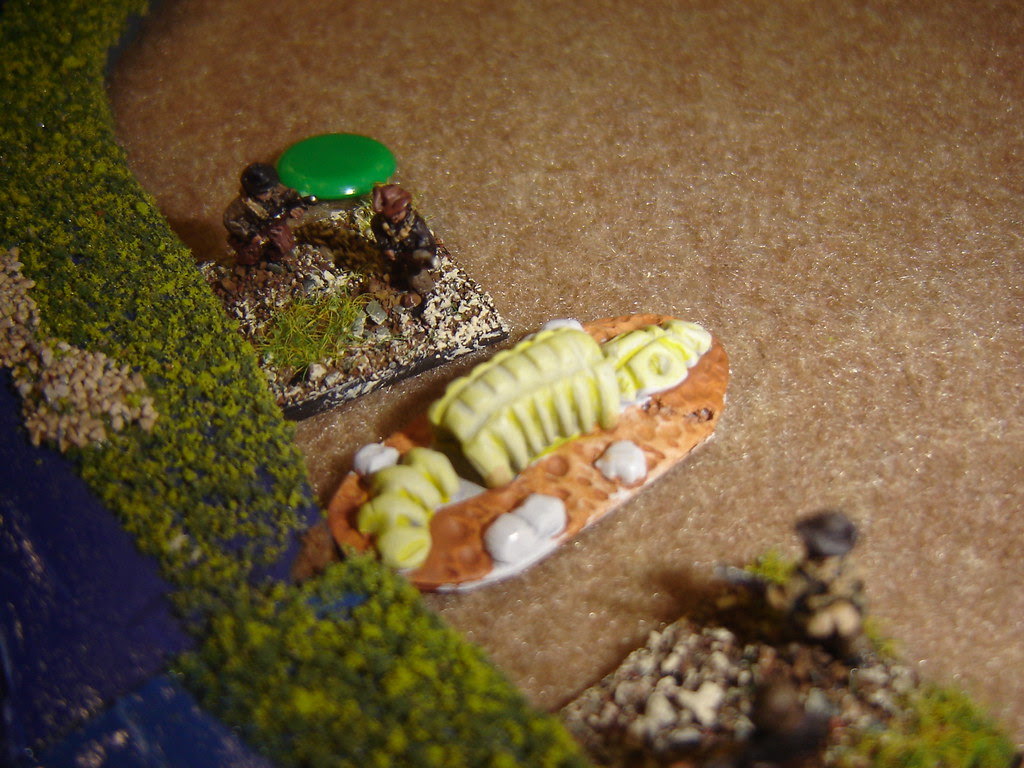 The field gun is brought across the ford, safely covered by the others. 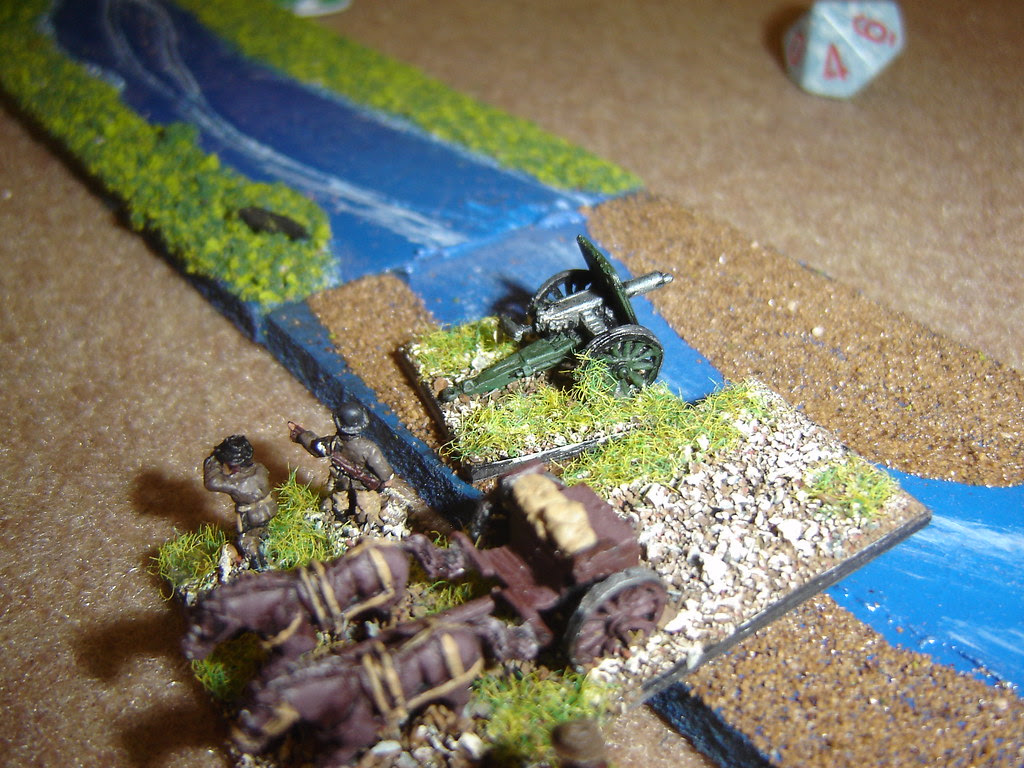 The second Edmonton, its speed belying it size, makes it back to the cover of its pasture. 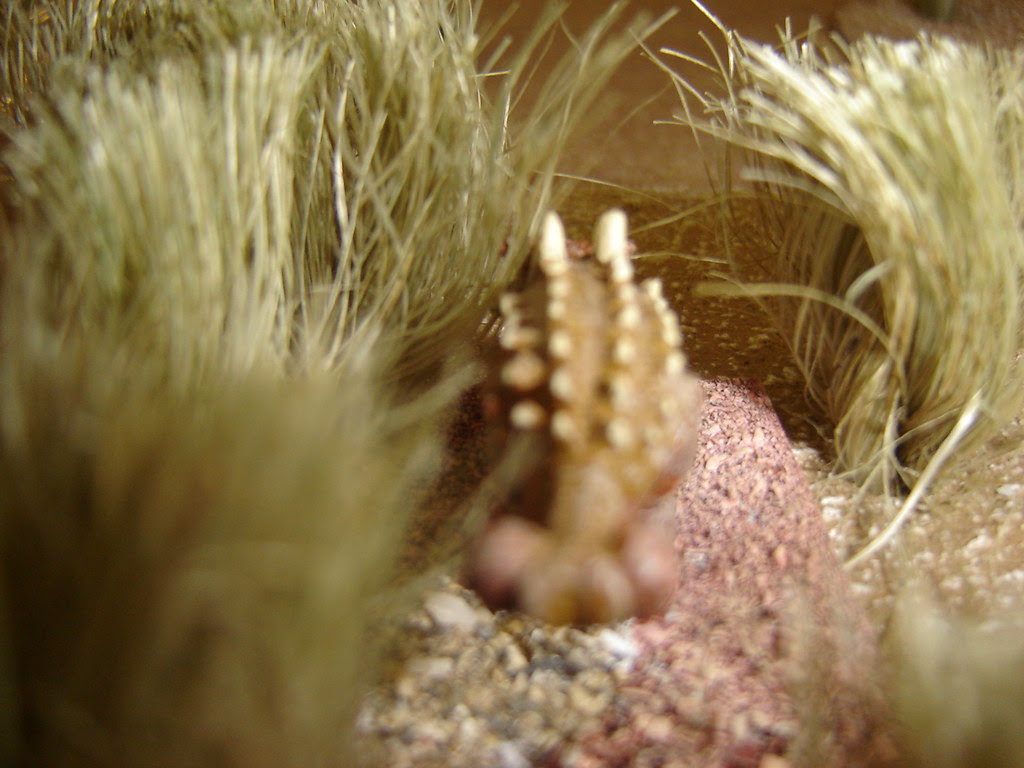