We can joke about Americans arriving late for wars - and the day after Gaelcon the Marines arrive!
Staff Sergeant Baxter leads a patrol into the jungle away from the St. Paul river where their gunboat lies. 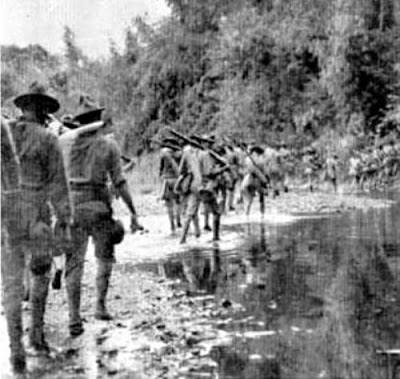 Baxter, Norton, Jackson and Hill move slowly through the jungle.

Up into the foothills through lush jungle

"Stay frosty" Baxter warns them. Jackson has a bad feeling about this one - Hill tells him that he always says that!

An uphill some Rators creep along a ridgeline

With danger surrounding them, Baxter orders the men onto a rock ledge overlooking a peaceful pool - here they can make a stand against whatever's in the jungle

A Crocodile strikes, but Norton avoids the beast - just like an Albino Alligator he saw in New York Zoo! (OK, I admit it, it's not painted)

Distracted and stepping back from the water, the Marines don't notice the creatures charge out until it's almost two late

A stern fusilade puts down two of them, Baxter waits until he can smell the Raptor's breath before unloading the shotgun into it. Another raptor teeters into the pool, and the waiting jaws of one lucky crocodile

Baxter gives chase and uses his pump-action to telling effect

Rather pleased with how this played out actually - I'm writing up some notes into the game now. Another playtest to come tomorrow or Tuesday.
Posted by Donogh at 21:43